When orbital spy satellites reveal Robotnik rebuilding a new mechanized boy amidst the ruins of the ancient, deserted city of Megalopolis, Sonic and Bunnie are recruited to stop him - but can they do so time?

It seems Sonic and Bunnie are not the only ones the President dispatched to Megalopolis - Rouge the Bat is there as well. When she confuses Bunnie for a bad guy, all heck breaks loose as our belles battle it out.

As Knuckles prepares to face Mammoth Mogul to save his dying ancestor Dimitri, he remembers a time when life was simpler and his father taught him the lessons that would serve him for times like these.

Bunnie Rabbot and Sonic the Hedgehog meet with the President of Station Square, who informs them that Dr. Eggman is constructing a new robotic body in the ruins of an abandoned city in Mobius' northern hemisphere. The President sent Rouge the Bat to stop him, but they soon lost contact with her. He asks Sonic and Bunnie to find Rouge and stop Dr. Eggman. Sonic asks why they were not his first choice and the President starts groveling, begging them to forgive him for being so inconsiderate. Sonic tells him he was just joking and asks him to calm down.

Sonic and Bunnie arrive at the ruins of Old Megaopolis, landing on a skyscraper to scope out their surroundings. Sonic notices that the ruined city is much smaller than New Megaopolis. Bunnie volunteers to search for Rouge while Sonic seeks out Eggman.

Sonic quickly finds himself being chased by heat-seeking missiles and realizes Eggman must be nearby. He ducks into the subway system and hops back out. The missiles explode, unable to maneuver through the tight corners of the subway entrance. Sonic spots Eggman's base and races towards it.

As Sonic enters the factory, he is greeted by Eggman's new robotic body. Eggman talks to Sonic, hitting him with a robotic arm from behind while he is distracted. Sonic is slammed into a nearby wall, but he quickly recovers and runs circles around the robot arm. Getting bored with their fight, Sonic lights a stick of dynamite, sticks it in Eggman's mouth, and runs out of the building. From a safe distance, Sonic watches the factory explode.

Rouge the Bat is stuck in a prison cell and thinks about how she was zapped and captured while flying through Old Megaopolis' defense grid. The electric "bars" locking her in her cell suddenly deactivate. Rouge walks out of her cell and sees Bunnie Rabbot standing nearby. Thinking that Bunnie is a cyborg programmed by Dr. Eggman, she attacks.

Bunnie and Rouge fight each other at length, crashing through buildings and windows, until they are both out of breath. Eventually Sonic finds them and tells them to calm down, explaining that they are not enemies. Bunnie and Rouge apologize.

In the past, Knuckles is with his father, Locke, as they watch intruders enter the Chaos Chamber. Locke leaves his son behind while Chaos Knuckles watches his younger self tag along in secret. Chaos Knuckles realizes he has accidentally sent himself back in time due to something his father said in the present and follows his father into the chamber.

Locke encounters some of Dr. Robotnik's Scout-Bot troops attempting to steal the Chaos Emerald. Locke tries to negotiate, asking them to take some of the Solar Cells from Hydro City instead, but the Scout-Bots refuse to compromise. The young Knuckles attacks the Scout-Bots, but is easily swatted aside. Chaos Knuckles wonders if he should help his father, but Locke uses the Chaos Emerald's power to disable the robots.

The young Knuckles asks his father what happened, and Locke explains that he used the Chaos Emerald's power to drain power from the Scout-Bots' circuits. He promises to teach Knuckles how to use the emerald's power someday, and Chaos Knuckles realizes that he needs to take his role as Guardian more seriously and take responsibility by saving Dimitri. Chaos Knuckles reappears in the present just as they receive a message from Constable Remington.

President: It's up to you' to find her and complete the mission. Stop Robotnik!
Sonic: Why didn't you call us in the first place?
President: Oh, please forgive me! What was I thinking? I should've known better!
Sonic: Dude. Chill...I was only joking! 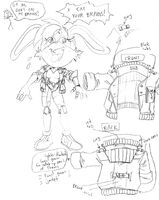