Cry of the Wolf

Last month readers said goodbye to Lupe and the Wolfpack. This month, witness how they first met and teamed up with the Freedom Fighters. Adapted from a classic episode of DIC's Saturday morning Sonic animated series, "Cry of the Wolf" is an issue-length epic which finds the classic incarnation of Sonic and his friends up against the original Dr. Robotnik and Snively, out to unleash their secret weapon.

From the Freedom Fighter Files: Cry of the Wolf

Sonic, Sally, and Antoine are exploring a cave when they run into a wolf. After introductions are made, the wolf says he'll lead them to the other end. He tricks them though and drops them down a trap door leading to the rest of the wolf pack.

The wolf pack introduce themselves as the Wolfpack Freedom Fighters. Sonic gets the idea that there may be other groups of Freedom Fighters in the world, unaware of the larger groups. The Wolfpack shows Sonic and Sally their collection of equipment stolen from Robotnik that they may be able to use to contact other groups. They then discover the pack has a cannon they don't know how to use. Robotnik sends Snively out to find the Wolfpack after they escaped him. While searching, Sonic and Sally set it up and Nicole activates the cannon, hitting Snively's ship.

The blast does no visible damage however, and Snively attacks back. Sonic uses a power ring to spin up a tornado and takes out the attack ship. The scout ship holding Snively continues the chase and captures Sally and Sonic. With them aboard, Snively quickly finds the tables turned when Sonic uses his speed to break free and tie the lackey up. The attack ship begins to attack again. Sally gives Sonic directions to lead the ship into a storm. Lightning strikes it, bringing it down once and for all. As Sonic returns, the news is given that other Freedom Fighter groups have heard their machines and are ready to talk to Sally ASAP. The gang then celebrates and Sally expresses how happy her father would be, knowing there are others seeking to defeat Robotnik and his Sub-Bosses. 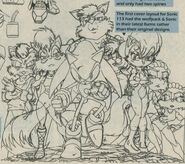 Original cover
Add a photo to this gallery

Sonic the Hedgehog comics
Retrieved from "https://sonic.fandom.com/wiki/Archie_Sonic_the_Hedgehog_Issue_113?oldid=2110692"
Community content is available under CC-BY-SA unless otherwise noted.