Having analyzed the information given to them by Knothole Kingdom, Station Square's computer system commences to launch a nuclear attack against Robotropolis - putting the environment at great risk. Can Sonic prevent disaster?

Princess Sally's connection to the Sword of Acorns is legendary, but it's about to take a turn of the most surreal kind.

Uncle Chuck wakes up Sonic and Tails, telling them that they've both been summoned to Castle Acorn. Sonic wonders why they need to get up so late at night. Sally and her parents tell Sonic and Tails that, fifteen minutes ago, NICOLE received a satellite transmission from Station Square. In the transmission, the President explains that O.T.I.S., Station Square's security system, changed its strategy from defensive to offensive after being given the data on Dr. Eggman Sally handed to the President. Sally explains that the O.T.I.S. has launched an atomic strike against Robotropolis. Realizing that a nuclear strike would poison the environment, Sonic and Tails ask if there's anything they can do to stop it, but Sally tells them the nukes have already launched and will hit Robotropolis in twenty minutes. Sonic refuses to give up and heads for Robotropolis with Tails.

In Robotropolis, Dr. Eggman is bossing around his Shadowbots when Snively reports that Sonic and Tails have been spotted in the city. Sonic holds up a white flag to call a truce. Eggman humors them and asks what they want, and Sonic explains they've come to warn him. He laughs at the idea when, suddenly, the alarms for his defense system goes off. Eggman discovers that three warheads are heading his way. Sonic asks him to use his orbital defense satellites to shoot down the missiles, for everyone's sake. He rejects Sonic's advice and orders him to leave. Sonic yells that Robotropolis is toast, but Eggman tells him that he'll be just fine when he raises his protective force field around the city.

Sonic and Tails race to sabotage the Robotropolis' force field, so that Eggman will be forced to shoot the missiles down. Eggman and Snively head for the controls, but find Sonic and Tails already there. Sonic stalls them for a while and escapes with Tails. Snively notices that they haven't tampered with the controls at all, but Eggman demands that he activate the forcefield. Sonic grabs on to Tails and runs up one of the missiles and out of the city before the force field comes up. The missiles end up inside Robotropolis, destroying the city. Sonic explains that he wanted the force field to come up, but only after the missiles landed safely inside Robotropolis. Tails looks at the ruined city, disappointed that they'll never be able to live in Mobotropolis again. Sonic cheers him up, reminding him that Knothole's their home now.

Sally is possessed by the Sword of Acorns as Alicia and King Max watch in terror. The possessed Sally tells them that there is a disturbance in the Source. King Max realizes that it's the Source of All, where the royal power originates. He has suspected that even though Sally rejected bonding with the source, the source hasn't rejected her.

In Sally's mind, she is shown the future by the Sword of Acorns. The sword shows her Sonic and Tails leaving Robotropolis, where Eggman and Robotropolis have been destroyed. The Sword also tells her that the Source of All is no more and was evaporated in the blast, the Sword of Acorns and the King's crown being the only remaining traces of the Source. Sally asks how she can know Sonic and Tails are safe when they haven't returned yet. The Sword replies that the sword's vessel sees the past, present, and future. Sally sees a vision of her being saved by the Sword and tries to run away from it. She soon stumbles on a future memory of her and Sonic under attack by Spider Ninjas. Sally shouts that she doesn't want to know the future, but the Sword says that she has no choice.

Alicia shakes the possessed Sally to snap out of it, and she drops the Sword and goes back to normal. Sally hugs her mother and cries that it's her destiny.

The editor prepares to talk with one of Archie's computer graphic artists, Joe Pepitone. Rotor overhears this and, surprised by the name, asks how often Joe is compared to outdated New York stereotypes. Joe beans Rotor in the head with a softball from his office. 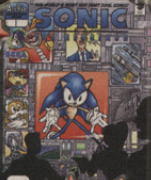 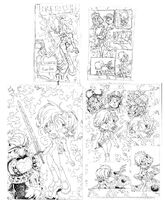