If you think you know what that title means - you're right! And you're not...Check it out as Sonic makes a startling discovery about the Doctor Robotnik know and the one we once knew, in this mystery wrapped in a riddle inside an enigma.

Hope, Dr. Robotnik's now orphaned niece, asks for asylum under the Kingdom of Knothole, but after all they've been through, can the Acorns ever trust another Overlander again?

The mysterious new echidna on the Floating island is going to great lengths to protect Knuckles - but from whom?...

In Robotropolis, Doctor Eggman and Snively are observing Knuckles the Echidna who has become powerful enough to alter the fabric of reality. Dr. Eggman uses his machine, which because of Knuckles' time/space tampering has reassembled the original Dr. Robotnik's molecules. Both of them confused, Dr. Robotnik orders the Swat-Bots (Shadow-Bots) to arrest Dr. Eggman, but they don't respond to him.

Meanwhile in Knothole Village, Tails is playing hide and seek with the rest of the Freedom Fighters. Tails flies past Bunnie Rabbot hiding in a tree trunk and Antoine D'Coolette hiding behind a tree. Sally Acorn watches Tails as he flies past her, thinking that he hasn't even spotted her in the trees or Rotor Walrus in the river. Tails hears some rustling in the bushes, thinking it's Sonic the Hedgehog, but Sonic appears behind him. Dr. Robotnik appears out of the bushes, happy to see them. Sonic is confused why he's standing there, when he saw Dr. Robotnik get wiped out of existence by the Ultimate Annihilator. Dr. Robotnik explains that another version of him brought him back, in order to steal his memories, and he barely managed to get away from his Shadow-Bots. Sonic doesn't feel he should care because they are just the same type of person.

The Freedom Fighters bring Dr. Robotnik to Castle Acorn, where Robotnik pleads for protection. Queen Alicia Acorn comments that he does look bruised and King Maximillian Acorn agrees that he can help. Sonic objects that he was the one that tried to turn them all into robot slaves and believes Robotnik might be a robot himself. Alicia orders Sonic that he can have Dr. Quack examine him. Doctor Quack confirms that he's the real Robotnik in the flesh. As the days pass with Robotnik's stay, Sonic finds Robotnik very annoying. After a week, Dr. Robotnik believes he's ready to face himself, while Sonic is thinking "about time".

The Freedom Fighters and Robotnik set off to Robotropolis in the Freedom Fighter Special. Robotnik apologizes to Sally for harming them all and wishes that they become allies once he's reclaimed his city. Sally takes no notice of his offer and none of the other Freedom Fighters do too. On landing, Robotnik says that if he gets into the hard drive, he can regain control. Sally tells Sonic, Tails, Antoine and Bunnie to handle the welcome party, while Rotor, Nicole, and her give Robotnik tech support. Sonic, Bunnie and Tails easily take care of the robots and Robotnik leads them to the control room. Inside is the machine that created Robotnik, Sonic not believing that it's a computer. The Freedom Fighters step onto the machine, and Robotnik activates the machine, trapping them. Dr. Eggman enters with Snively and tells them that their molecules are disassembling because of his matter fluctuator. As they are disassembling, Sally activates Nicole, who destroys the machine. Sonic reveals that they knew that they would be betrayed. Dr. Robotnik and Dr. Eggman start a fight, as the Freedom Fighters leave. They take off as Sonic is explaining to Tails that Dr. Robotnik's molecules were too unstable. Dr. Robotnik disappears during the fight with Dr. Eggman and punches Snively instead. Dr. Eggman, unable to use the machine, simply mutters "I hate that hedgehog!".

At Castle Acorn, Sally reads her parents a letter from one of the Overlander refugees: Dr. Robotnik's niece, Hope.

Hope says that Sonic was the first Mobian she ever saw, and that he looked terrifying at the time. She was so scared of him that she believed her Uncle Julian when he said that Mobians were evil creatures. After living in Robotropolis for some time with her step-father and grandmother, she saw a roboticized Mobian and began to think they may not be evil after all. She explains that she knew that when Sonic lead the Robians out of Robotropolis he was freeing them, not attacking anyone, and that she could never forget how Sally and Sonic saved her from the Shadowbots. She says that Knothole was a beautiful place full of kind people, and that when she was in space in cold-sleep the spaceship's computers taught her about Mobius' past. The machine taught her that Overlanders and Mobians have always hated each other, and that they left Mobius for that reason. She thanks Sally, Sonic, and the other Freedom Fighters for finding a new home for the Overlanders and making peace between them both. They letter ends with a request to stay in Knothole.

Alicia and Max grant the request, and Hope runs into the throne room and hugs Sally, thanking her for letting her stay.

Lara-Le is shocked that Knuckles is supporting the Dark Legion, asking him to think of how his father will feel. Knuckles argues that she doesn't care about what he thinks, but she retorts that they see eye to eye on politics. Knuckles asks why she won't hear Dimitri out before judging him. Lara-Le barks back that she thinks he's a danger to her children. Knuckles is taken aback, and Lara-Le reveals that she's pregnant.

Meanwhile, in the High Council Chambers, Dimitri speaks passionately to the High Councillors about ensuring peace between all echidnas regardless of affiliation with the Dark Legion. The Mitre argues with Dimitri that Aurora did not mean for echidnas to artificially replace nature, but Dimitri argues back that as echidnas, they are smart enough to think for themselves what they want. Elsewhere, Jani-Ca is waiting for Knuckles to leave Lara-Le's house, considering how little she knows about the past. She follows Knuckles, who soon meets up with Lien-Da, the one person her mother refused to talk about. Knuckles and Lien-Da head inside the High Council Chambers just as Dimitri finishes his speech. Knuckles defends Dimitri to the High Council, insisting that they need to trust him in order to stop their war with the Dark Legion and bring peace to Echidnaopolis. Jani-Ca attempts to sneak in, but is stopped by a guard. She uses her Chaos powers to throw him into the ceiling, knocking him out. She enters the room and sees Remington pull out his gun, thinking she's too late. 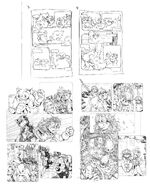 The original cover
Add a photo to this gallery

Sonic the Hedgehog comics
Retrieved from "https://sonic.fandom.com/wiki/Archie_Sonic_the_Hedgehog_Issue_108?oldid=2072180"
Community content is available under CC-BY-SA unless otherwise noted.