Things are heating up as Sonic continues defending the Hidden City of the Ancients from the dragon that besieged it in the last issue. Meanwhile, the rest of the Freedom Fighters do their best to keep damage to a minimum - both to the building and the citizenry, whose alliance the Freedom Fighters are counting on. It's not easy - someone or something is intent on keeping them from accomplishing their mission. Who could it be?

It's the moment Knuckles fans have been waiting for: the embattled hero has finally restored his family and friends back to their home of the Floating Island - but with the Dark Legion now part of the equation, can confrontation be far behind?

At the President of Station Square's residence; Sally Acorn, Bunnie Rabbot, Antoine D'Coolette and Rotor Walrus are knocking at Sonic the Hedgehog and Tails' door, waiting for them, while they are playing video games. Tails doesn't understand why they can't play another game, but Sonic reminds him that they're here to stop the dragon.

Soon, the President introduces the Freedom Fighters to Commander Brass, his military strategist. Brass explains that the dragon threatens their very way of life after the attack yesterday. Sonic ends up falling asleep as Brass is explaining it, so Sally wakes him up and asks that he goes on. Brass suggests that Paladin Team Sigma-Alpha 2 goes with them as back-up. Sonic laughs that they are back-up remembering meeting them first and beating them. Sally backs up Sonic's laugh by making the Overlanders believe that it's their custom.

Later; Sonic, Bunnie, Tails and the team head to Pyro Island. As Sonic, Bunnie and Tails are trying to lighten the mood, the dragon takes out Rico and Spike. The rest of the team stop Sonic and his friends from finding the dragon, insisting that they find their men first. Sonic tries to explain that they can find them later and one of the members insults Sonic. Sonic, Bunnie and Tails separate from the team and find the dragon's lair behind a waterfall. Inside, they are shocked to find Dulcy the Dragon in the cave. Dulcy explains that the dragon that attacked Station Square was her mate Zan. Zan appears from behind, while Dulcy is trying to explain that they're her friends. Sonic and Zan begin arguing while Dulcy explains that the Overlanders attacked them first. Bunnie notices Dulcy's arm is sore, when Zan tells them he was burning off some steam. Sonic objects that he nearly fried him and he goes on to explain that they need to talk this out before someone gets hurt. The team arrives in the dragon's lair and shoot a net at Zan; they also notice Dulcy and attempt to attack her. Sonic disarms the team like their last encounter, but Zan soon attacks them since they are disarmed. Sonic stands in front of the team to defend as Dulcy tries to talk to Zan. Zan uses his tail to shoot Dulcy out of the lair as Sonic launches a punch at him. Bunnie and Tails exit the lair and try to comfort Dulcy. The team exits after planting explosives in the lair, and the lair explodes around Sonic and Zan. Sonic uses his speed to launch himself out from underground. Dulcy cries over the loss of Zan as the team gloats over their victory.

After being informed of their victory, the President accepts the Freedom Fighters offer to bring in the Overlander refugees.

At the Dark Legion's base, Lien-Da and Dimitri are watching Remington and the female echidna from the last issue on the monitor. Lien-Da is angry that Chaos Knuckles restored the 'good citizens' back in Echidnaopolis. Dimitri is more concerned that Knuckles demonstrated more power than he ever did as Enerjak. Lien-Da being told that Knuckles has that much power and feels that he should be terminated. Dimitri reminds Lien-Da that he could be listening to them right now, but Lien-Da wants to see a pawn do her biding, referring to the echidnas on the screen.

In Echidnaopolis, Remington asks if Lara-Su is alright, in which she says her name is Jani-Ca, thinking that if she told her real name it would sound the alarm. Lara-Le and Wynmacher walk over to Remington; Lara-Su recognizing her grandma. Lara-Le asks if Remington has seen Knuckles, but Remington reforms them that he's either tending to his business or he's with his friends.

Meanwhile, Mighty the Armadillo, Vector the Crocodile and Espio the Chameleon notice that they're back on the Floating Island, but are wondering where Knuckles the Echidna and Julie-Su are. Elsewhere, the Brotherhood of Guardians wonder if the Dark Legion is behind Haven's destruction. Thunderhawk informs them that they were in a battle at the Grand Conservatory and then they were here. Locke the Echidna notices that Mathias is no longer with them, Spectre also points out that Hawking isn't either. Spectre informs them that Hawking has joined Mathias unto the next evolution and senses that someone else has too. Locke asks if it could be Knuckles, when a telepathic message from Knuckles enters Locke's mind. Knuckles tells him that he's in the city. Locke snaps out of it when Sabre asks what's wrong as Locke realizes something has gone wrong with Knuckles.

Chaos Knuckles appears to Wynmacher, Lara-Le, Remington and Lara-Su. Lara-Le hugs Knuckles as Lara-Su wonders why he's green. Remington introduces Knuckles to Lara-Su as the Guardian. Suddenly, Dimitri appears out of nowhere, Remington aiming a gun at him. Chaos Knuckles stops Remington from attacking when Dimitri explains that the Technocracy wishes to rejoin Echidna society.

Sonic: Chill, l'il buddy—we can play later. Right now, we've still got that problem to take care of...
Tails: ?
Sonic: Y'know the one that flies? With the scales? And the fiery breath?
Tails: Oh yeah! The Dragon! Let's go! 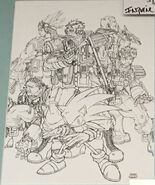 Main cover sketch
Add a photo to this gallery

Sonic the Hedgehog comics
Retrieved from "https://sonic.fandom.com/wiki/Archie_Sonic_the_Hedgehog_Issue_107?oldid=2110652"
Community content is available under CC-BY-SA unless otherwise noted.