Freedom Fighters of the Galaxy, Part One

A tribute to the Guardians of the Galaxy brought to readers by the team that created them, writer Mike Gallagher and artist Jim Valentino. In an alternate future, Sonic comes back to Mobius after being in space for a thousand years to find the planet in worse shape than when he left it. Teaming up with the descendants of the original Freedom Fighters, the heroes combat an evil so great, they wish the original Robotnik was back.

The Return of Downunda Freedom Fighters, squaring off against the Bunyip in a tale recalling the early days of the Sonic comic series.

Freedom Fighters of the Galaxy - Part One

Zone Cop Zonic introduces himself and takes the reader to a zone 1000 years into the future-the year 4235, where Mobius is barely habitable. A spaceship is seen crashing by a figure in shadow. From it climbs the zone's Sonic the Hedgehog, wearing a black suit. The figure in shadow and two others leap down to confront Sonic. The leader attacks, only to be blasted back by Sonic's suit, which he explains can harness his speed as a bolt of energy. The one that attacks him is a two-tailed fox. Sonic explains his history—Doctor Robotnik tricked him into a rocket that he thought held Sally Acorn. Robotnik launched him into space where he was found by aliens named "Pearlmen". They saved him and gave him his life-saving suit, then sent him on his way.

The fox knows some history and mentions how "Ivotnik" started the War of the World in 3235-the year Sonic left when the Freedom Fighters lost their champion. Robotnik won the war. The fox introduces himself as Tailon, an adapted survivor, and takes Sonic to see the other surviving people. They pass by and are attacked by a group of robot Echidnas named the "Brass Knuckles." The two of them take out the small group, but a much larger one appears. The day is saved when the rest of the Freedom Fighters appear, each based off a Freedom Fighter from Sonic's time—Bunni (Bunnie), 'Twan-Du (Antoine), Rotor-27 (Rotor), and Saleta (Sally). There is another, a human-like bird named Hawkhawk. Each of them demonstrates their powers and defeat the robots.

Saleta tells Sonic more of the War of the World. Robotnik roboticized almost every living thing and the planet imploded soon after, killing him. Four surviving Freedom Fighters went to Robotropolis and each took a rocket to a different planet in order to rebuild the population. Evolution took hold, giving each species powers. Generations later, a group called the Shark attacked (the Shark were accidentally created by the Forty Fathom Freedom Fighters when they launched some of their hydrotechnology into space). The Shark attacked each planet, only leaving a single person alive on each. The warrior Hawkhawk then found each of them and formed the Freedom Fighters of the Galaxy.

Hawkhawk wants Sonic and Tailon to join them to prepare for the apocalypse he knows is coming. Sonic asks about the coming doom when it happens—the Silver Snively appears which, according to Hawkhawk, is the heralding of Robolactus, the planet glutton.

The Downunda Freedom Fighters are holding auditions to replace Wombat Stu. As all the candidates are pathetic, they begin to reminisce about when the team was first formed. Investigating illegal activity, the three of them found cages with a lot of animals packed inside and papers revealing they were scheduled for testing. Wombat Stu appeared and joined them, revealing the existence of Crocbot, who was behind all of the illegal actions. Just as they're about to attack Crocbot's lair, the mercenary Barby Koala joined them and they took him by surprise. With Robotnik's help, he returned even stronger.

They're attracted to a commotion outside. They find a bird who had auditioned hurt. With his last words before falling unconscious, he blames the bunyip, a mythological creature. 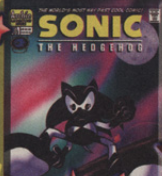 Original cover artwork
Add a photo to this gallery

Sonic the Hedgehog comics
Retrieved from "https://sonic.fandom.com/wiki/Archie_Sonic_the_Hedgehog_Issue_103?oldid=2135826"
Community content is available under CC-BY-SA unless otherwise noted.