Don't Cry for Me, Mobius!

The issue begins with Sonic the Hedgehog running away from Dr. Ivo Robotnik, who is chasing Sonic and trying to blast him with "Mega-Muck". Sonic is abruptly stopped by Caterkiller, but dodges Robotnik's attack again, causing Caterkiller to be hit by the mega-muck. Sonic then speeds away into the Great Forest, splashing the muck all over Robotnik as well.

Going down the Great Oak Slide, Sonic meets up with Princess Sally, Boomer and Tails. Tails, admiring Sonic, asks him if he defeated any more robots. Sonic begins to brag, but is interrupted by Sally, who argues he may have left a trail for Robotnik to track him and locate their secret hideout. Sonic assures her his super speed prevented this. Antoine shows up and explains there is a leak in Knothole, which might allow Robotnik to locate them. 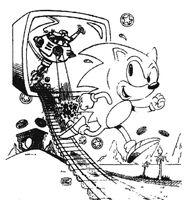