To Kristin Parcell and Cindy Chau at SEGA Licensing

"Big Trouble in Little Station Square, Part Two": Look out below! Vectorzilla is on a rampage – or is he? When a super-sized Bokkun shows up to save the day, things go from bad to worse! It's up to Sonic and Espio to find the cure before G.U.N. steps in. It's all the action and laughs you've come to expect from SONIC X, and then some!

Mr. Stewart is evacuating the school to protect the students from the rampaging Vector. Sonic forces Dr. Kai Narasu to reveal that the mutagen made Vector swell up to an enormous size. Espio knows an ancient ninja remedy that could help Vector. Sonic and Espio set off to acquire the remedy, while Charmy is put in charge of guarding Dr. Narasu and Hector Dragg. Hector easily distracts Charmy by pointing away and asking "What's that?", and the S.O.N.I.C.X. members escape.

Dr. Eggman sees this as an opportunity to make himself a hero to Station Square by sending another giant monster to defeat Vector. Sonic launches himself onto Vector's headphones to tell him that he needs to stop moving. Vector is then attacked by Super Megatized Bokkun, who is the same size as him, as Sonic and Espio continue their task of finding the remedy.

Sonic and Espio arrive at the pharmacy. A confused Sonic notices that Espio has decided to use aspirin and argues that it isn't ancient. Espio proves that it is, but Sonic says there are no ninjas in Greece. G.U.N. fighter planes prepare an attack on Vector and Bokkun. Sonic launches himself up to Vector's level and throws the aspirin in his mouth, which causes him to shrink back to normal size. Bokkun is then attacked by the fighter planes away from Station Square.

Vector feels fine and Charmy is warned not to play with medicine. Mr. Stewart gives the kids a second recess, also wanting to find out how Sonic saved the day. Meanwhile, Bokkun is bandaged up by Eggman and his hench-bots and the Organizer scolds Dr. Narasu and Hector for failing their mission once again. Narasu and Hector apologize, but the Organizer does not care about their apology, stating that he may have to handle things himself.

Espio: When used properly, aspirin can reduce inflammation and swelling.
Sonic: That's not ancient!
Espio: On the contrary. The first uses of this compound have been traced to Greece in the fifth century B.C.E.
Sonic: There weren't any ninjas in Greece!

Vector: Thanks for the save, guys. Let's head back to the office and I'll call for pizza!... and a contractor. 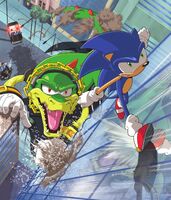