BUNNIE gets ready for a NEW VENTURE in “Freedom Fighters” Part Two! Where there’s smoke, there’s fire — and in this case, evil too! Bunnie is summoned to Blaze’s world in a desperate attempt to repel the invasion of a new, sinister force! Featuring cover art by jammin’ Jamal Peppers and a “Freedom Fighters Forever” variant by the excellent Evan Stanley!

Due to the cancellation of this issue, pivotal information, such as names and dialogue, are unknown. However, page scans have given a taste of what was to come.

Bunnie D'Coolette is transported to the Sol Zone by Marine the Raccoon via the Jeweled Scepter in an attempt to help Blaze the Cat fight against a mysterious creature nearby. Bunnie makes it to the battlefield, where Blaze and a member of the Coconut Crew are in the middle of a brawl against a creature known as Null. Null manages to absorb a member of the Coconut Crew before forming into Null's true state. Bunnie and Blaze fight against the creature, with Bunnie absorbing Null's dark matter before she manages to eliminate the mysterious creature. Blaze is able to cure Bunnie of the dark matter Null gave to Bunnie. After the fight, Blaze and Marine send Bunnie back home. 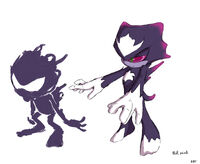