to Sandra Jo, Mai Kiyotaki and to the Character Business and Licensing Dept. at SEGA Corporation

Knock knock, it’s KNUCKLES in “Shattered” Part One: A brand new adventure starring Knuckles and Amy Rose begins here! It’s a race against time to find the final Master Emerald shards before Sonic restores the shattered world! The final installment of Knuckles’s search, filled with dangers and mysteries, starts with this issue! Featuring cover art by the terrific Tracy Yardley plus an “& Knuckles” variant by CG artist supreme Rafa Knight!

Shattered Part One: Closing In

In Green Hill Zone, Knuckles rescues a Locky and another Master Emerald shard from falling into a crater filled with lava. Afterwards, Amy assures Knuckles that all will be well and they run off to Castle Acorn in order to get King Acorn's clearance to search Westside Island for the other shards.

At the castle, Knuckles and Amy find Team Dark also asking King Acorn for his permission, but to find Eclipse and his Dark Arms. They believe that Eclipse had taken refuge on Westside Island, leaving Knuckles to believe that he is also after the Master Emerald shards. Rouge feels it is best for them to team-up, much to the annoyance of the Knuckles, Shadow and Omega.

King Acorn allows both teams to continue their searches but warns Team Dark about betraying his trust. He leaves Amy to act as the kingdom's liaison during the missions and they go on their way. Knuckles makes Rouge hand over the hidden Master Emerald shards that she had before they left, but the former is surprised that the latter handed them over so easily.

At the Royal Airfield, Team Dark allows Knuckles and Amy to ride with them in their G.U.N. Shuttle. Shadow explains that the rest of G.U.N. were sent to the largest corners of the world to keep it secure while Sonic and his team save it. They arrive at Mystic Cave Zone where Omega detects a bioform signature and Knuckles sensed the last three shards.

They drop down to the Hidden Palace Zone, finding large emeralds that look similar to the Master Emerald, but without the same power capabilities. Omega finds himself unable to pinpoint the target due to the abundance of crystal surfaces interfering with his sensors. Rouge decides to split everybody up; she assigns herself with Amy so that the latter can keep an eye on her, makes Omega go his own way and leaves Knuckles and Shadow to team-up, slightly annoying the latter two.

The girls find themselves in a predicament when large emerald shards pierce their way out into their direction. Omega also finds himself in trouble as a mysterious person crystallizes him without warning. Knuckles and Shadow eventually find themselves face-to-face with an echidna named Nixus, who is also looking for the Master Emerald shards.

Knuckles equips himself with gear in order to find the Master Emerald shards, until Amy appears to have found one in no time. She tells him that his methods are outdated by about fifteen years and Knuckles tries to not let this comment get to him.

To promote this issue, toy company Tomy released this issue with two Sonic figures, Classsic and Modern Knuckles. This was the first release of Tomy's Modern Knuckles figure, however Classic Knuckles was a re-release. 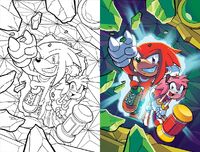