to Sandra Jo, Mai Kiyotaki and to the Character Business and Licensing Department at SEGA Corporation

Eggman’s got the MASTER PLAN in “Eggman’s Dozen” Part Two: Dr. Eggman has suffered a humiliating defeat at the hands (and claws!) of the malicious Naugus Twins! But everyone knows that you just can’t keep a good villain down-so what’s a demented doctor to do? Form a coalition of evil! When Dr. Eggman forms a strike team of his Egg Bosses around the world to strike back, will these misfit minions mesh into a fighting force? And what sinister secret is Dr. Eggman using to keep them in line? Featuring cover art by jamming Jamal Peppers and an awesome “Boss Attack” variant by lightning Lamar Wells!

The issue begins with a flashback starting off where the last one left off. Naugus is seen promising a horrible fate to both Eggman and Sonic. Sonic simply brushes it off, but Eggman attempts to offer a deal. This enrages Naugus as he rants claiming they already had a deal and he double-crossed him. Just then, Wendy Naugus rushes in claiming a small child has just gotten through all her forces and is on his way there and that she needs Walter's help. They both run off to deal with the problem, leaving Eggman and Sonic to escape. We cut back to present day with Eggman fast asleep as Orbot and Cubot tell him it is time to wake up, for his Egg Bosses have arrived. Eggman introduces himself to the gathered Egg Bosses and explains his current situation. Battle Lord Kukku XV and Tundra the Walrus express their dislike towards this, while Thunderbolt the Chinchilla berates them for the criticism as they are here to serve Eggman "and like it". Eggman then excused Thunderbolt and states that he has a special presentation for them. He then had Orbot and Cubot bring out one of his soldiers he calls Tassel Boy, where Eggman reveals that because the Foreman allowed Bunnie to infiltrate the Foreman's base and get away with the power generator, he had activated the fail-safe in his cybernetics, making the Foreman unable to move but still breathing and conscious to be placed into storage until Eggman felt fit. With the room silenced by the scene, Maw then inquires the presence of Dark Gaia Monsters if Dark Gaia energy is involved. Eggman informs him that no Dark Gaia monsters should be around because all the energy was stored away so no monsters could form.

After this, Eggman sends Tundra and Akhlut to go and temporarily shut down summing spire to cut of the Witchcarters' supply of Dark Gaia energy. On there way there, the two traded insults about the other and how they other were weak in the war the fought against each other. Meanwhile, Eggman sent Clove and Thunderbolt to go shut down the defenses. Unfortunately, Thunderbolt becomes stuck in the door but refusing to leave the suit claiming Eggman gifted her that armor and she wasn't going to leave it. Nephthys and Maw are sent to shut down the Badniks' command signal. Lord Mordred Hood and Conquering Storm are sent to take out the Witchcarters while Kukku and Abyss take out the backup generator. Finally, Eggman took off with Axel to directly assault the Naugus twins. When Akhlut and Tundra reach the power generator, Akhlut continues to insult Tundra the Walrus until he snap smacks him across the face. Akhlut, now seeing him as a threat to the mission, takes this opportunity to neutralize Tundra as they lunge towards each other in anger. Meanwhile, Thunderbolt asks Clove to stop and asks why she is not thankful for everything Eggman had done for her, calling Cassia a brat in the process. Thunderbolt continued and said if she did not explain herself she would be punished but did not get to finish her threat as the walls started to close on her. Riled by Thunderbolt's disrespect, Clove pulled out her scythe and claimed no one gets to judge her sister. In the skies, Maw and Nephthys were shot down and surrounded by crystallized Badniks. As this happens, Conquering Storm confronted the Witchcarters head-on, despite Hood's protests. Outside the backup generator, Kukku and Abyss are ambushed by a Dark Gaia monster as the two Egg Bosses get surrounded by Dark Gaia creatures. During this time, Axel and Eggman end up running into Dark Gaia Titan who crushes the ground near Eggman, causing him to fall towards the lava.

Thunderbolt, Clove, and Axel pass by a stand to which Clove thinks serves caramel apples but is informed that they are caramel-covered boiled eggs. Unsettled by the fact but maintaining her loyalty, Thunderbolt orders five eggs.

A Dark Gaia Creature hits Dr. Eggman so hard that he knocks him into a familiar looking comic. 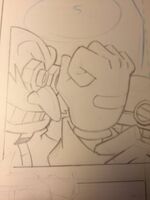