to Stacy-Arnold Strider, Sandra Jo, Mai Kiyotaki and to the Character Business and Licensing Department of SEGA Corporation

SILVER FIGHTS for his FUTURE in "The Silver Age" Part 3: Silver is at the mercy of the heartless council, but their cold nature is nothing compared to the evil then unleash! Gold's mysterious past is now revealed, as well as how it's tied to the current calamity. Will it be up to Silver to save his future once again? Featuring cover art by long-time Sonic Comic artist, Tracy Yardley and a "To the Future" variant by newcomer Adam Bryce Thomas!

Following the previous issue Silver, Gold and Professor Von Schlemmer are still trapped by the Onyx City Council. The council intended to throw the trio into the Genesis portal they forced Gold to open. Silver tries to escape but a councilman lets him know that they made adjustments to make sure no person with a special ability can escape. With that, two of the Civil Protection Robots throw Silver and the professor into the portal, ignoring Gold's pleas to not let in an unknown creature.

While inside the portal, Professor Von Schlemmer is released by dark entities surrounding him. He has the Bits release Silver and the latter flies them out but not before hearing a large bellow from a beast below. Silver evades the beast's grasp, landing everyone outside. The professor is alarmed at the state of the Genesis Portal which had spun out of control.

Gold receives telepathic shocks which also affects Silver. The professor and the Bits release Gold just when the council try to run away. Silver does not let them go and along with Gold and the professor, they scold them for their actions. Before the argument can get out of control, the beast's hand emerges from the Genesis Portal, destroys the building rooftop and freezes the Council.

While still trying to escape the depths of the portal, the monster knocks Silver, Gold and Professor Von Schlemmer off the building. Silver is able to catch them all in mid-air and asks Gold not to communicate with him via telepathy as the Second Devourer escapes the portal, looking furious. Silver lands the gang badly which knocks out the professor. He is told to be still conscious as The Second Devourer begins his assault on Onyx City.

Gold explains to Silver she previously encountered the beast at a younger age and escaped via a Genesis Portal. She was first found by the Council and was later accepted as their fifth member at a mature age but it was only done to keep a closer eye on her. After this, she gives up hope of trying to defeat The Second Devourer. Silver disagreed with her statement and while levitating Professor Von Schlemmer, he asks Gold to come back with him to the professor's lab so he could fix the damage brought upon them.

Gold comments that there is an annoying song stuck in her head. The song is heard through her telepathy, causing the Bits to run like crazy, Silver shutting his ears and singing it maniacally, while Von Schlemmer yells at them to stop.

Professor Von Schlemmer: Oh, nein... Ze portal has grown beyond control, just like I thought it would!
Silver: Professor... ...I hate it when you're right!

Silver: (Seeing Gold start to panic) Gold, whatever you do... ...Please don't hit me with one of those psychic whammies right now!

Gold: We can't stop it. It's no use.
Silver: "It's no use"...
Gold: Huh?
Silver: I'm getting really sick of people saying that. C'mon. Let's get back to the professor's lab.
Gold: What are you going to do?
Silver: I'm gonna fix this. 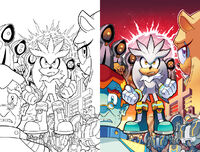