to Stacy-Arnold Strider, Sandra Jo, Mai Kiyotaki and to the Character Business and Licensing Department of SEGA Corporation

SILVER THE HEDGEHOG RETURNS in an ALL-NEW adventure! Enter:"The Silver Age": Part One

Silver the Hedgehog's future may no longer be a terrible burning ruin, but it certainly is far from safe! Mystery and danger abounds as Silver is dragged into a dangerous conspiracy linked to the reality-warping menaces known as the Genesis Portals! Featuring cover art by Sonic comic extraordinaire Evan Stanley plus a "HERO" variant with art provided by SEGA!

The Silver Age Part One

Silver is seen using his psychokinesis to close a Genesis Portal from which a monstrous entity appears to be trying to emerge from.

The issue then cuts to the scene of Onyx City, a dystopian city set in Silver's future. The Onyx City Council make a public service announcement regarding the need for people to report for their assigned work shifts. The Civil Protection Robots will "aid anyone who is unsure about their assignment". The Council reminds everyone to report to them if someone is not doing their civic duty. Silver is among the crowd, annoyed and disgusted by the Council's intentions.

As he walks out of the crowd, he spots a Civil Protection Robot. The robot reports that the Teal Class work shift has begun and those assigned to this must report. The crowd becomes nervous, as the robot demands people to step forward now, or disciplinary action will be taken. Silver slowly tries to get away, but then hears someone cry out- the robot identifies one of the citizens as a Teal Class worker. Silver is angered, but keeps quiet, realizing that they will take him in too. As the robots capture the citizen, Silver decides to save him, so he uses his telekinesis to make the robot slip and fall, making him lose grip of the citizen, as the latter runs away. The Robots go after him, and Silver also takes his leave, wishing the citizen good luck.

Silver returns to his home, a grassy alleyway strewn with debris, which he uses to practice with his powers. As he levitates all the junk, he hears a voice praising him. In alarm, Silver turns to see a blue-skinned man watching him, telling him to keep going. Silver drops all the junk and tells him he saw nothing, but the man, who introduces himself as scientist Professor Von Schlemmer, calls him a hero, just what is needed to counteract the Genesis Portals. Silver asks what a Genesis Portal is; as if on cue, one opens up right underneath him and Von Schlemmer and both fall into it. Silver shouts at Von Schlemmer to make it stop; Von Schlemmer says he can't, but Silver can by using his powers. Just then, shadowy black hands appear inside the portal and grab them, though Silver breaks free. Von Schlemmer, swarmed by many other hands, urges Silver to use his powers, and Silver does so after hesitating for a moment. To his amazement, it does work as Von Schlemmer said. Grabbing the professor, Silver escapes from the portal and closes it.

As Silver collapses in exhaustion, Von Schlemmer notes that the Genesis Portals' existence endangers reality as they know it. Determined to prevent this and convinced that Silver can do it, he decides to take Silver to see the Council at the science center. Silver angrily protests, stating that telekinetics who are brought before the Council never come back, but Von Schlemmer refuses to take no for an answer and carries him off.

Elsewhere in the city, it is revealed that the appearance of the Genesis Portal that Silver and Von Schlemmer fell into was part of a test by the Council. As the four taller members of the Council prepare to enact the next stage of their plan, the shortest member wonders what closed the portal. The tall members brush it off, thinking it was just an equipment error, leaving the short member to stare thoughtfully at a bizarre-looking machine.

Silver asks Professor Von Schlemmer if his accent is real; he insists that it is. We then see him listening to a record player explaining how to talk like a mad scientist.

Silver: 'Hello, trash pile...ready for practice? "Sure, Silver!". I need to stop talking to myself. 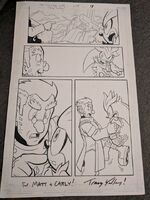