Archie Sonic Universe Issue 78 is the seventy-eighth issue in the Sonic Universe comic series published by Archie Comics. It is the ninth part of the "Worlds Unite" crossover.

The third and final act of the EPIC SONIC/MEGA MAN CROSSOVER EVENT begins here! "Worlds Unite" Part Nine: Sigma has begun his conquest of ALL the worlds. Now it’s up to Sonic, Mega Man and X to unify those worlds AGAINST Sigma! It’s a “who’s who” of SEGA and Capcom heroes answering this important call to arms! But with Sigma still active on the unified world, he turns his gaze upon those left behind..! Featuring the worlds of STREET FIGHTER, SKIES OF ARCADIA, NiGHTS INTO DREAMS, OKAMI, GHOSTS 'N' GOBLINS, ALEX KIDD and more! Plus cover art from the legendary Patrick "SPAZ" Spaziante, and variant cover art from "Worlds Collide" penciling star Jamal Peppers and part 9 of the epic 12-part connecting variant cover series by artist Ben Bates!

Picking up where the last issue left off, all the heroes of the Unified Army head into Genesis Portals conjured by Sigma to seek heroes from the worlds they lead into. Sonic and Break Man enter one, with Sonic telling Break Man to brace himself. However, the world they emerge in is nicer than Sonic expected: the Miracle World, home of Alex Kidd, whom Sonic and Break Man see fighting Magna Centipede with his friend Stella. The Maverick laughs confidently that he can win, only for Alex and Stella to destroy him almost instantly. Sonic congratulates them, surprising Alex, and the two introduce themselves. Sonic then introduces Break Man, who is busy examining Magna Centipede's Unity Engine (which he never got a chance to activate). Impressed, Sonic asks for their help in fighting Sigma, which Alex and Stella agree to.

In Astaroth's Castle, Sir Arthur is confronting Astaroth and his minion Firebrand for the release of Princess Prin Prin when Geemel and Zain show up. Mistaking them for allies, Arthur asks them for help, but Zain just shatters his armor. Bunnie and Zero swoop in and stop the Mavericks, but before they can fight, Astaroth interrupts them, demanding to know what is going on. An astonished Bunnie explains the situation, which Astaroth does not accept, but Geemel attacks her, declaring Sigma's will shall not be stopped. In response, Astaroth incinerates both Mavericks and calls a truce: Arthur is to go with Bunnie and Zero to deal with Sigma, with Firebrand joining them to ensure the job is done.

Back on the Unified World, Sigma gloats about his imminent ascension to godhood, but also realizes that his enemies are hindering his efforts. Knowing they will cause him trouble if they are allowed to rally again, he turns his menacing gaze upon the nearby Sky Patrol...

From another Genesis Portal, Knuckles and Quake Woman emerge near Crescent Isle. Knuckles is surprised to see a floating island - much like his own - as Quake Woman notes that someone is battling the Maverick they're following already. On the island, Drachma and Enrique of the Blue Rogues are fighting Tidal Makkoeen, who dismisses their efforts to stop him as futile. Gilder steps up to challenge him, claiming his guns will make a difference, but the Maverick just smacks all three of them aside. However, another member of the group, Aika, hits him with her boomerang and calls team leader Vyse over to finish the job as Fina heals their injured friends. With Aika covering for him, Vyse strikes Tidal Makkoeen down with his sword just as Knuckles and Quake Woman arrive. The Blue Rogues are surprised at the sight of a talking animal as well as the look of Quake Woman's armor. Knuckles and Quake Woman explain their presence and ask the Blue Rogues to join them, to which they readily agree and starts firing up the Delphinus.

Meanwhile, Sticks, Chun-Li, Ryu, Ken, and Guile have returned to Metro City in the world of Street Fighter to stop Magma Dragoon from setting up a Unity Engine there. Magma Dragoon manages to block Chun-Li's kicks, but swiftly falls to a surprise attack from Ryu and Ken. The two men then beat the Unity Engine to a pulp as Sticks cheers on her new team from Guile's shoulders. Chun-Li notices that Guile looks concerned and asks what is wrong, to which he points out that Magma Dragoon's partner, Blizzard Buffalo, is not present. Indeed, Blizzard Buffalo is at Shadaloo, setting up another Unity Engine. However, he is interrupted by the resident villain, M. Bison, who is obviously irked by the presence of a trespasser on his turf. Annoyed at the interruption, Blizzard Buffalo attacks the hostile villain, but M. Bison deflects the attack and seizes the intruder by the neck, forcing him to explain himself. M. Bison then coldly breaks Blizzard Buffalo's neck, stating that Sigma has "gained Shadaloo's full attention".

At the Dream Gate in the world of NiGHTS into Dreams..., NiGHTS and Reala are gracefully dodging Storm Eagle and Storm Owl, who attacked them amidst a fight of their own. NiGHTS is more displeased with the Mavericks' inability to play nice than their presence in his realm, but is still enjoying himself, leaving Reala annoyed by his rival's lack of seriousness. Tails and Air Man appear and attack the Mavericks, allowing NiGHTS and Reala to finish them off. NiGHTS apologizes for the rough welcome, but Tails brushes it off, stating Sigma is the one to blame. NiGHTS thinks fighting Sigma sounds like fun and invites Reala to come along. Reala refuses at first, but gives in at the order of his master, the evil Wizeman, who refuses to have an outsider villain challenge his claim to the realm of Nightopia. Tails and Air Man thus lead their new recruits back to the Genesis Portal they came through.

In the world of Ōkami, Sally and Wood Man are admiring the scenery of Kamiki Village when they hear a wolf howl. They look to see Amaterasu fighting Blizzard Wolfang. Amaterasu wounds her opponent, who commends her for a well-fought battle. Then, with a swift stroke of a brush on a painting, Blizzard Wolfang and the Unity Engine he brought are destroyed. Issun, Amaterasu's sidekick, spots Sally and Wood Man and urges her to attack, but Amaterasu can tell that the visitors are not enemies and licks Sally's hand in a friendly manner. After Issun introduces herself and Amaterasu, Sally asks for their aid in fighting Sigma. Amaterasu agrees, with Issun, as her assistant, coming along too. As they head for the Genesis Portal, Sally feels worried about Cream despite Wood Man's assurances that she is safe.

Back on the Unified World, Cream, Cheese, Flash Man, Fastidious Beaver, and Comedy Chimp tremble in fear as the cackling Sigma holds the Sky Patrol in his enormous hand.

Knuckles the Echidna challenges Alex Kidd to Rock, Paper, Scissors. Knuckles wins by choosing Paper against Alex's Rock... then realizes he cannot use paper - it is his grocery list.

NiGHTS: These bird-brains don't play very nice, do they Reala?
Reala: We were dueling before they attacked us, you child! 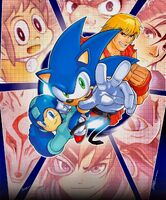 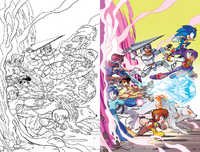 Variant cover, without color and with color.