"Fury": The race is on as Sonic chases down Metal Sonic for one of the sought–after Chaos Emeralds! But when their chase takes them to a very unexpected place, Sonic’s worth as a hero may be put to the test! Can Sonic win the day, secure the emerald and retain his sense of self by the end? As our journey to WORLDS UNITE crashes to a close, join us in celebrating the longest-running Sonic the Hedgehog spin-off comic in history with 7.5 variant covers from your favorite Sonic artists! Featuring cover art from Patrick "SPAZ" Spaziante, Tracy Yardley, Ben Bates, Tyson Hesse, SEGA Studios, Patrick Thomas Parnell, Lamar Wells, Evan Stanley and Jonathan H. Gray! To name a few!

In Crystal Desert Zone, Sonic, Tails, and Bunnie are chasing Metal Sonic, who has the cyan Chaos Emerald. Sonic vows not to let Metal get away, since Eggman already has one Emerald and that was bad enough. Nearby, the rest of the Freedom Fighters are at a G.U.N unit and are helping the soldiers from recovering. Sally gets a call from Rouge, who asks her what had happened. Sally reports that Metal Sonic attacked the unit and stole the Emerald, which irritates Rouge, as she believes she should be on any gem-centric missions. Sally tells Rouge to send support for the wounded. Rouge asks about Metal Sonic, and Sally responds saying that Sonic, Tails, and Bunnie are after him. Meanwhile, Metal Sonic detects a Genesis Portal, and marks it as a possible escape route. Metal Sonic speeds up, and the gang try to catch up with him, Bunnie tries to shoot at Metal, but misses. Suddenly, a Genesis Portal appears, and Sonic tackles his metal doppelganger, causing both of them to go inside the portal.

They end up in the Burning Ruin Zone, where Sonic finds Silver closing the portal. Both are surprised to see each other, but Metal kicks Sonic and escapes. Silver comes to his aid, and Sonic tells him to grab Metal Sonic; Silver states that the robot had already departed, and apologizes for not expecting both of them to come through the portal. Sonic is confused, and Silver explains that he was closing all the Genesis Portals that he could find, and with Metal Sonic stuck with them, he won't be able to escape. Sonic is disappointed in this, but Silver points out (by projecting a hologram from one of his gloves) that there are three budding Genesis Portals in the area. Sonic asks if one of those portals will lead him back to his world. Silver says he had been closing a lot of portals, and most of them came from his world. As both run to find Metal Sonic, Sonic asks Silver why he would "waste his time" closing the portals, and Silver fears that someone might get lost in them, to which Sonic agrees. Sonic tells Silver about current events, just as the two reach the area where the portals are, much to Sonic's relief. Sonic plans to wait for Metal Sonic to detect the Portals, and then ambush him. However, Sonic rethinks his plan, since Metal is based on him.

The heroes were unaware that Metal was already behind them and the robot attacks them, just as the three portals start forming. As Metal heads for the portals, Silver attempts to stop him with his psychokinesis, only for the Badnik to use his Black Shield to break free and taunt Silver. This proves to be a distraction, for Sonic arrives and kicks the Emerald out of Metal's hands. Sonic tells Silver to find out where the portals go to, while he and Metal race for the Emerald. The two try to get to the Emerald, but before either of them could get to it, Silver snatches it with his telekinesis and taunts Metal Sonic. The robot is then hit and kicked by Sonic into a pool of lava. Sonic asks Silver where the portals go to, and he points to the correct one. Sonic forms a new plan, just as Metal Sonic survives the Lava with his Burst Shield. Sonic taunts Metal, and the robot chases both hedgehogs to the portals. Silver wonders if antagonizing him is going to work, and Sonic explains that since Metal is based on him, he won't give up, just like Sonic, however, he adds that he does know when to stop running. The two hedgehogs dodge Metal Sonic as he inadvertently enters one of the wrong portals.

Metal Sonic ends up in the Distant Abyss Zone, and tries to go back to the portal, but is too late, for by then Silver had closed it. Back in the Burning Ruin Zone, Silver guides Sonic back to the right portal, but before Sonic leaves, he asks Silver whether the world will be fixed. He responds with a question of his own, asking if Sonic would truly give up even if he was told he was destined to fail. Sonic said he simply would fight his destiny, and bids Silver goodbye as heads back to his world. Silver closes the portal, and wishes Sonic good luck, knowing that he could do it. He goes into the other portal, and ends up in a snowy world. Back in Crystal Desert Zone, Sally is forming a plan to find the Genesis Portals and rescue Sonic. Before she could finish, however, a Genesis portal appears before them, and from it emerges Sonic, with the Emerald in hand. Amy is elated to see Sonic again, though her happiness is quickly changed to disgust as she notices his odd scent. Sally expresses her gratitude, welcoming the hedgehog back, as Sonic gives Tails the emerald. Tails asks what happened to Metal, and while Sonic is unsure, he knows they won't have to worry about him for a while. Antoine, viewing the situation differently, worriedly points out that the planet is still in pieces and that they have not found a single Gaia Temple. Bunnie tells him to focus on the small victories as Sonic agrees with her. He sums up their time in the Crystal Desert Zone and his in the Burning Ruin Zone, adding that they are the Freedom Fighters, and they are qualified to handle anything.

Meanwhile, Eggman is annoyed that Metal Sonic is lost in another dimension. He asks Orbot for a sandwich, to which the robot complies while a red figure looks on from behind.

While having some chili dogs, Sonic asks Silver what will life be like in two hundred years. Silver refuses to say, and asks him for the mustard. Sonic pesters him to tell, then Silver says that in the future chili dogs will cost a thousand bucks a piece. This shocks Sonic, who squeezes the mustard bottle too hard, and he ends up getting soaked, while Silver uses his telekinesis to protect himself.

Silver: Um...he's already gone. It looks like he's faster than you...
Sonic: Lies and slander.

Sonic: C'mon, we're teammates! Don't you always want to be by my side?
Amy: I do, and I always will but I'm keeping my distance until you've showered!

The toy company Tomy released this issue with two Sonic figures, Classic and Modern Sonic. This was the first release of Tomy's Modern Sonic figure, however Classic Sonic was a re-release. 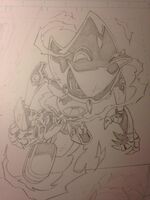 A preview sketch for the issue released by Tracy Yardley. 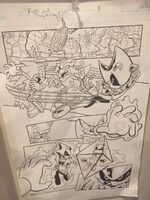