"The EPIC CONCLUSION to the alien-smashing saga starring Shadow the Hedgehog IS HERE! "Shadow Fall" Part Four: Shadow vs. Black Death – for the fate of the world! Who will walk away alive? Who won’t make it to see a new day? Meanwhile, Rouge and Omega desperately try to save their G.U.N. comrades as Eclipse hunts them down! All this with a ticking nuclear time-bomb in the background! Don’t miss the pulse-pounding conclusion! Featuring new cover art from Tracy Yardley! and a special "CGI" variant by newcomer Sonic superstar Rafa Knight!!

Shadow and Black Death are locked in heated combat, Black Doom calling Shadow a traitor and trying to convince him that he should remain loyal to the Black Arms. Shadow rebuffs his argument, calling the Black Arms' definition of "survival" an attempt to justify the destruction of all other races, and recalling his promise to Maria to protect the billions of people on Sonic's World. Shadow then removes his Inhibitor Rings. Meanwhile, all of Spider Troupe meets up, with the captured part explaining what happened, and reveals that the rest of Team Dark is retrieving the bomb. Heading over to Rouge and Omega, Shadow stopped sending them instructions, and they realize that while Shadow fights, they're on their own. The two quickly find the nuke, without guard. Realizing that this must be an ambush, Omega steps forwards, and Eclipse with a Black Oak step out of the shadows. Omega shoots down the Black Oak, and Eclipse mourns the loss, cradling the alien warrior's head. Omega toys with Eclipse while wrestling with him, and Rouge, calling Omega a sadist, tells him to leave, bomb the place and be done with it. But Eclipse has another trick up his sleeve... He uses metamorphosis to transform into his Monster Form, and tosses Omega right next to Rouge. After recovering, Rouge has Omega fight Eclipse while she arms the bomb, and Omega charges Eclipse.

Eventually, the bomb is to detonate in 10 minutes. Eclipse is unable to keep this form any longer, so Rouge and Omega escape the Comet. Back at the Black Death's Chamber, Shadow and Black Death are still fighting when they get a call from their respective team-mates. Shadow finds out that Rouge and Omega have activated the bomb, and they only have nine minutes. Shadow tells Rouge that he is not done fighting. Black Death hears from Eclipse that the bomb is armed, and has no idea what to do with it. Rouge tries to get Shadow out of the Comet, but Shadow reveals that if Black Death is killed, the hive-mind will be disrupted, and that he is returning the favour, since Rouge and Omega saved him from mind-control. Rouge then tells him that there are eight minutes. He then waits for Black Death.

Black Death finds out that the Dark Arms Larvae is being loaded out of the comet. He tells Eclipse that since he is not a part of the hive-mind, he must get out of the Comet. Eclipse refuses, saying that he can attempt at disarming the bomb. Black Death commands the Black Arms to prevent the Spider Troupe, Rouge and Omega from escaping, and he tells Death's Eye to get to Eclipse. Eclipse is then forcibly dragged to the shuttle by Death's Eye, he attempts to apologize and convince Black Death to let him fight Shadow, but in vain. The shuttle takes off. The fight continues, with Black Death saying that if he dies, the empty Black Comet will fall onto Earth. Shadow says that was what the bomb was for. Black Death vows that he will not die like how Black Doom did, but Shadow unleashes a powerful Chaos Blast, killing Black Death instantly. While putting his Inhibitor Rings back on, Rouge then reports that all the Black Arms collapsed, Shadow says that it is over. Rouge warns Shadow that he has five minutes, Shadow tells them to take off, he is on his way.

Back on the shuttle, Eclipse cradles the deceased Death's Eye. Knowing that Black Death is dead, Eclipse screams that his revenge will be far worse, as the shuttle heads towards Earth. Shadow is running as the clock is ticking. The ship takes off as well. Rouge and an injured Omega watch, in wonder if Shadow will make it in time. Rouge thinks that Shadow will make it, since he is an 'arrogant so and so'. But then, the Comet explodes, erasing any evidence that the Black Arms existed. Rouge and Omega are horrified that Shadow didn't make it on time. But Shadow himself appears, looking very fatigued. Rouge embraces him, but is angry about his 'dramatic timing'. He reveals that he used the decompression of the comet to fling him to space. Rouge says that it is all over now, but Shadow says that Eclipse is remaining.

After the Credits Scene A

Knuckles the Echidna is standing at Sky Rail Zone, sensing a very faint energy signature from his direction. As he thinks about his having left the Master Emerald in the care of a particular female, he sees Eclipse's shuttle, which he thinks is a shooting star. He hopes to himself that it won't land on his island---he has enough to deal with as it is.

After the Credits Scene B

Back at Guardian Units of the Nation Headquarters, Commander Tower speaks with an unseen scientist. The scientist tells Tower he should have been allowed to work on the field. Tower disagrees, saying he needed to keep an eye on him. The scientist is then revealed to be Dr. Julian Snively.

Omega continuously replays a clip of the New Black Comet blowing up, admiring its beauty. An annoyed Eclipse sits next to him on the couch asking if they can watch something else. 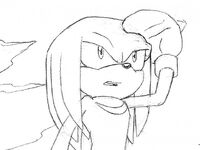 Page twenty pencils (After the Credits Scene A)