to Anthony Gaccione and Cindy Chau, and to the Character Business and Licensing Department of SEGA Corporation

Ahoy, ye mateys! Tharr be trouble on the high seas! Blaze—a pirate prisoner! Amy, Cream and Marine—lost! Bean—an oddball, be we knew that already! It’s a race against time as Cpt. Metal begins his plan for the Sol Emeralds and his new, completed Egg o’ War! And now that ye mention it — there's something REALLY familiar about that battle station, but I just can't put me hook on it! There’s mystery and mutiny a'foot in Pirate Plunder Panic Part Two! Featuring new cover art from Tracy Y'ARRRR-dley, and a special Sega variant cover!

Blaze the Cat recaps the events of the previous issue. The Blackguard Pirates, led by Captain Metal, had taken her prisoner and all of them reach their island. As she sits in her cage, she summons a flame, startling a sprocket next to her. The sprocket gets away when Bean tries to toast a marshmallow with Blaze's flames. Bean is annoyed by Blaze's uncooperative behavior, and Captain Metal taunts Blaze. He tells her that her fire won't melt the cage, since it is made of tungsten carbide. Blaze angrily asks what's stopping her from blasting him through the cage. Captain Metal tells Swash and Buckle to show her, and Swash electrocutes the cage. Captain Metal tells her to 'sit tight', as he has plans for her and the rest of the Sol Emeralds.

Somewhere in the sea, Amy breaks the crate they were in, just before the ship exploded. As the crate slowly starts to sink, Marine panics, commenting that her ship sunk. As she continues to panic, Amy tells her to stop talking. Amy says to stay positive and try and help Blaze somehow. Marine is motivated by the idea, but panics when they see sharks. Amy gets her hammer ready, while Marine tells Cream to fly them to the nearest island, since the sea is filled with various sharks. However, it turns out they were dolphins. Cheese talks to the dolphins and Cream translates that the dolphins saw the pirates capture Blaze and take her to their island, and they would give a ride to the three. Amy thanks the dolphins as they move on. Back on the island, Bean decides to cheer Blaze up with one of Bark's smoothies. Swash tells Blaze that if she co-operates, she may come out in one piece. Buckle adds that Captain Metal took down robotic heads of other pirates that had tried to cross the island. He notes that the captain had met Blaze before and has plans for her, and reckons that's she's safe, for now. Meanwhile, the heads of other robot pirates are angry at the Blackguard Pirates and threaten them helplessly. Blaze knows about this, and remembers seeing someone that looked like Metal, and asks who he was. Swash and Buckle tell the story.

According to the story, Dr. Ratcheturn was out at sea looking for robots that were in need of repair. The doctor never returned, but a robot did with his boat. Claiming that he was back from the dead, he challenged another robot pirate, Boltbeard, for leadership. He tore him apart and used his parts to upgrade himself. They met him at that time, and follow him to this day. Swash is not sure what he's planning, but says that Metal is truly a pirate. Blaze notes that he's a monster, and vows to take him down. Just then, Bean arrives with the smoothie in hand. Blaze is confused, then submissively sips the smoothie.

Meanwhile, Amy, Cream, Cheese, and Marine reach the island and thank the dolphins. Cream notes that the island is creepy, and asks Marine if Dr. Eggman isn't there. Marine says that he's not there. The group explores the island, while Marine warns them that there are robot pirates. Cream wonders how they were going to hide and find Blaze at the same time. Amy says they should solve one problem at a time. They do not notice the Sprockets, who spot and follow them. Amy and Cream find Marine, who is being carried by the sprockets. The two chase after them, with Amy smacking some sprockets with her hammer. Cream tries to free Marine, but there are too many sprockets. Amy then sees a tall building and after hearing them say 'fire cat' she realizes that they were trying to help them. She tells them to lead the way.

Meanwhile, the pirates and Blaze reach the tower, to which Metal shows the cat. He plans to give the weapon power with the Sol Emeralds. Bean gets attracted to one of them. He kindly asks Blaze to hand over the emeralds. Blaze angrily refuses, saying that she is the master of the emeralds and they are useless to him in any case. The rest of Team Rose reach the building with the help of the Sprockets and their chief. The chief introduces them to the group, and says that the pirates hunt the Sprockets and smash them. The Sprockets make a ladder for them, and the chief tells them to get inside and save Blaze while they help. Back in the tower, Metal explains that the weapon was from another world, and he found it, built it, and learnt its secrets. As Blaze is raised up with the help of a magnet, Metal continues to gloat about his new weapon. Team Rose reaches the top of the tower at that time and the three and Blaze then see the weapon, which turns out to be the Egg O' War. As Amy, Cheese, and Marine look on in shock, the Sprocket Chief tells them to save Blaze. Amy tells Cream to give her a lift to her cage. Marine sees Captain Metal and is infuriated at the loss of her ship. Blaze is overjoyed to see Amy and Cream, and Amy says that it takes more than one doom laser to stop them. She asks where Marine is, and Cream says that she was with the Sprockets, only to find her facing Captain Metal, much to the gang's horror. Marine is angry about the loss of her ship and the kidnapping of Blaze, and is about to attack, but Cream saves her from Captain Metal's laser.

Metal tells Buckle to open the Tank platform and allow Amy, Cream, Cheese, and Marine to share their end with Blaze. Captain Metal taunts her, saying that the Kraken will 'grind their bones'. Blaze uses her flame to melt her cage. Blaze notes how difficult it is to cut the bars, and tells Amy to break the cage at her word. Metal tells Swash to release the magnet before they break free. When the Kraken finishes them, he'll get the other Sol Emeralds. As Metal reaches for the red emerald, he finds out that Bean and Bark had it. Bean summons his bombs, and says that they will take the emerald as their pay for 'surveillance'. Enraged, Metal tells Swash to drop Team Rose towards the Kraken, and the others to get the Sol Emerald. The Kraken starts to rise, as Blaze tries to cut the bars.

Blaze is seen in a wooden cage, and says that the cage won't hold her for long. She sets fire to the cage, but also sets fire to a part of the deck, causing her to fall inside the ship, just missing Captain Metal and Bark.

Bean: Poor broody meow meow. Bark! Let's Whip her up one of your blue ribbon tropical fruit smoothies!
Bark: [salutes]
Swash: Don't feel too down, missy. If you play this right, mayhap you'll come out of this with yer hide in one piece.
Bean: Don't forget the umbrella!
Buckle: Aye. Stay on the cap'n's good side. He's got a mean streak, he does. Took off the heads of other pirates that tried an' cut in on his territory.
Pirate Head #3: G'yarr! Cime back for another whippin', eh?
Bean: And a slice of lemon, and one of those tiny swords with three cherries on it!
Swash: Seems the cap'n met ye before. Says he's got plans fer ye, so I reckon yer safe fer now.
Pirate Head #1: Oh, I see! Runnin' away, eh?
Pirate Head #3: Ya yellow Buggers!
Pirate Head #2: I'll bite yer legs off!!
Bean: And a bendy straw! No one likes the straight ones!

Swash: Not sure what he has planned, but it's big. That much I can say. A thinker, he is. A fighter, too! A real pirate's pirate!
Blaze: He's a monster. This time, I'll see that he's taken out of this world for good.
Swash: Ah, lassie, We'll just see about that, we will.
Bean: Here you go, you cutie-wootie-mootie-tootie! Straight from Barista Bark and Blue Billy Blenderbeard with loving care! Cheers!
Blaze: [submissively sips smoothie]

Captain Metal: Release the magnet juuuust before they get free. When the kraken be done with 'em, I'll pick out the other Sol Emera--! ME SOL EMERALD! WHERE BE ME SOL EMERALD?!
Bean: Sorry, but I'm afraid we'll have to give notice. We'll just take this shiny in lieu of servance pay. I'm sure we can expect a shining letter of recommendation!
Cream: Oh,my!
Marine: Better hurry up, mates! Things are crook in Tallarook!
Amy: It's now or never, Blaze!
Captain Metal: Mr. Swash, drop those fools to the Kraken! The rest of you, GET ME BACK MY SOL EMERALD!!
Buckle and Swash: Aye aye, cap'n!
Bean: BREE HEE HEE! SHINY SHINY SHINY!! 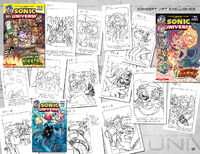 Concepts of the regular cover.