To Cindy Chau and Jerry Chu at SEGA Licensing

"Inside Job" Part Two: Scourge the "Evil Sonic" is imprisoned in Zone Jail! He's going to need support to escape, but the mercenary gang of the Destructix aren't interested. Can Scourge delve into their dark pasts and find a reason to gain their trust? Or will he wind up a green smear on the wall?

Inside Job Part Two: Any Port in a Storm

In the Zone Jail yard, Scourge the Hedgehog once again finds himself the victim of the inmates' bullying. However, he is somewhat indifferent this time around; thanks to Fiona Fox, he now has the motivation and means to escape the prison. Despite his less-than-positive opinion of the Destructix, he's willing to "play nice" and get them back on his side if it means a successful breakout.

Horizont-Al and Verti-Cal watch as Scourge is shoved around, timidly glad that they themselves aren't being targeted. Scourge is again annoyed to think that they've come remotely close to being considered his friends within the prison walls. Guards soon arrive to break up the fighting; they tell Scourge that Warden Zobotnik wishes to see him. Scourge is indignant as he's lead away, and Al and Cal's support doesn't do much to help.

Scourge soon finds himself in the warden's office. Zobotnik graciously explains that he believes that Scourge is well on his way to being reformed, and so he has some concerns about the idea of Scourge hanging out with the Destructix at all. Scourge casually denies any involvement with the group beyond being marked as their "favorite punching bag." Zobotnik decides to show Scourge the footage of the Zone Cops' encounter with the Destructix which lead to the latter's arrest. In the video, Fiona and the Destructix are confronted by Zone Cops on the Cosmic Interstate for illegal cross-dimensional travel; however, rather than submitting quietly, the group viciously attacks the officers. Scourge watches, amused, before the warden abruptly turns the monitor off. Turning back to the hedgehog, he explains that this group is much too dangerous for the hedgehog to associate with, even claiming that in comparison, the Suppression Squad were mere "thugs." The warden once again expresses his concerns that the Destructix will endanger Scourge's rehabilitation, if not his life, but Scourge plays along and assures the warden that if he has any trouble, he'll come to him immediately. The two shake hands, the warden thinking that Scourge has finally been broken to the point that his successful rehabilitation is a sure thing, while Scourge amuses himself with the thought of using the warden's face as a doormat when he leaves the prison.

Scourge returns to the yard, feeling confident. From afar, Fiona happily watches, remarking that this is the Scourge she's familiar with. Another inmate, Abby, is less impressed, not understanding why anyone would see anything admirable in "Snot," but Fiona insists that Scourge is amazing. While casually (and cruelly) dismissing a timid inmate acting as her servant, Abby tells Fiona that she's been in the prison for three decades, and that in that time she's seen a lot of "pretenders;" however, she tells Fiona that she doesn't get that impression from her. Hugging herself, Fiona explains that when she was a child, she was abandoned in a prison for a long time, and only eventually escaped through her own grueling efforts. She adds that she never found her family and assumed that they had simply moved on without her. After what she felt were numerous betrayals and double-crosses, she came to believe that she could only truly rely on herself. Eventually, she felt that using people was second-nature, and that this made it possible to achieve anything she wanted. She tells Abby not to worry about herself or "her boys;" she always has a plan. Unseen by them, Jeffrey St. Croix is listening in with interest...

Wasting no time, Scourge heads to the exercise yard, where Sergeant Simian is lifting weights. He pleasantly offers to spot the gorilla as he works out, an offer Simian finds dubious, but then insists that he's merely trying to make up for his rude dismissal the day before. Simian doesn't find this all that sincere, and Scourge, impatient, asks what he wants from him. Simian says, "Let me tell you a story..."

When Dr. Ivo Robotnik began his conquest, Sergeant Simian, then known as Simon, was eager to fight back. However, his grandfather, despite having nearly been injured by attacking robots, insisted that their people could remain safely hidden in the Great Jungle. Despite this, Simon went out and amassed several weapons, planning to attack a base of Robotnik's located on the edge of the jungle. Discovering the stolen weapons and hearing of Simon's intentions, the grandfather grew angry, telling Simon to "have [his] little war" and abandon their people's peaceful ways, but to not drag the rest of them into the conflict. Simon left immediately and staged a one-man attack on the base, causing much destruction; however, he was eventually overwhelmed by SWATbot. With no regrets, he believed himself about to die, but instead woke up within a cave, surprise and unharmed. His rescuer turned out to be Mammoth Mogul, who was impressed with Simon's abilities. He offered Simon even more power in exchange for loyal service; Simon agreed, desiring the power to destroy any enemy who crossed his path. He continued to work for Mogul for a time, and then, with permission, decided to check up on his family. The gorillas, who had become militant themselves, were overjoyed by his return; even his grandfather admitted that he had been right all along. He offered Simon a sergeant's sash, asking him to lead the group. Simon took the sash, musing that he had earned it... however, he believed that his people had not earned him, and thus left them behind.

Scourge finds the story "harsh" but doesn't understand what it has to do with him. Simian replies that he simply wants to work with the strongest. He tells Scourge not to dismiss and insult people only to beg for their help later, especially with the strength he was reputed to have. Simian wants Scourge to show him—and the prison—his true strength. Pleased that that's "all" Simian wants, Scourge offers his hand, and the two shake. While he cannot speak for the others, Simian says that Scourge will have his strength on his side.

Elsewhere, in the recreational area, Predator Hawk sits atop the backboard of a basketball net, observing the prisoners below. He's suddenly jarred when a basketball strikes the backboard. Down below, Scourge calls out that he wants to "talk business." He throws the ball again, and Hawk catches it; he remarks that he saw Scourge talking to Simian, and since the latter didn't beat him up, he'll take the time to listen to the hedgehog. Getting to the point, Scourge asks Hawk what he wants from him; Hawk replies that he's always wanted challenge and purpose.

Years ago, he thought he'd found those very things by joining the Battle Bird Armada; working hard, he excelled in all areas and quickly rose through the ranks. However, he grew disenchanted; with his promotions came more rules and restrictions, not less. He felt he had no future because, regardless of how hard he worked, how much he strove to earn, the best position would automatically go to the Armada's heir, Speedy. Eventually, this lead to him attacking Speedy, only to be quickly taken down and arrested. He was freed by the Babylon Rogues, they themselves Armada deserters. He found life with the Rogues an improvement as it had new challenges, and he enjoyed hunting down members of the Armada, but he didn't find much challenge in hunting treasure, which was their primary goal. He felt that the leader, Jet, like Speedy, did not deserve his position of power. While trying to sell off some treasures in a bazaar, a customer agreed to pay Jet for a particular piece... but only if Predator Hawk agreed to come with him. The customer, Mammoth Mogul, was interested in what he saw as a "brilliant living weapon," and felt that Predator Hawk could be useful in removing "certain... obstacles" in his way. Working for Mogul, Hawk found himself with new purpose, challenges and prey.

Still holding the basketball, Hawk jumps down from the backboard. He tells Scourge that he needs to challenge him, to give him targets, to earn his respect. Smirking, Scourge snatches the ball from him and says that by joining him, he'll "let him take out a few guys." Finding this an improvement, Hawk tells the hedgehog that he'll be waiting. A buzzer sounds, instructing prisoners to return to the cell block. Predator turns to leave, warning Scourge not to disappoint him. Nonchalant, Scourge lines up with other prisoners, and Al and Cal eagerly join him, amazed that he's gotten through the day largely intact despite talking to the "terrifying Destructix fellows." Scourge tells them that he was merely scheduling times to get beaten up.

Later, Scourge is relaxing in his cell. Smalls the Cat attempts his usual taunting, but Scourge is indifferent; he's already gotten half of the Destructix back on his side. He's quite confident that not only will they soon be able to escape, but he'll be able to dish out some well-earned revenge on the way.

Horizont-Al and Verti-Cal are performing a puppet show. Cal notes that every name in the No Zone begins with a "Z". He then says it reminds him of a "Zonk" on the head, hitting Al. Al then says "It was funnier when Gendy Tartakovsky did it!" 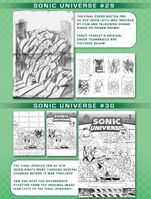 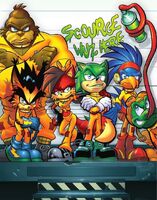