to Cindy Chau and Jerry Chu at SEGA Licensing

"Old Soldiers": Shadow is sent into the remote mountains to find E-102 Gamma. At the same time, Dr. Robotnik launches the over-powered E-123 Omega to hunt down and destroy the rogue robot! It's a race against time to see if Shadow can save Gamma and offer him asylum - if Gamma even wants to be saved! It's the latest installment of this exciting new series presenting unifying continuity while spotlighting the many characters from Sonic's various video games and animated series.

The story opens with Commander Abraham Tower in the briefing room of the Guardian Units of the Nation HQ with Shadow the Hedgehog and Rouge the Bat, explaining the situation regarding E-102 Gamma while Dr. Eggman does the same in his Eggdome with E-123 Omega. They explain to their respective viewers that E-102 Gamma was originally an elite fighting robot that served and was built by Eggman, but he went rogue after the Egg Carrier crashed and destroyed as many of the other E-100 Series as he could. Once he had destroyed the last known E-100, he traveled all over Mobius fighting the Eggman Empire, and performing good deeds such as secretly helping the Downunda Freedom Fighters, but has never openly helped or allied with anyone.

Commander Tower wishes to change that by recruiting Gamma and offering the failing robot asylum and sends out Shadow to find him, but Eggman has other plans. He orders Omega to find and destroy Gamma. At first, the robot refuses, saying that Eggman had put him in storage for over a year and that he was made to destroy Sonic the Hedgehog, not to perform this lower task. Eggman then threatens that he would put Omega into storage for another decade if he doesn't do as he's ordered.

Feeling distraught about not being able to turn Metal Sonic to his side, Shadow sets off alone at once to in a G.U.N. helicopter to find Gamma, as does Omega with his jet boosters. After Omega is gone, Snively questions whether or not sending Omega to destroy Gamma was a wise idea as he was so powerful, but Eggman says that he doesn't want anything interrupting his rematch with Sonic. Snively then says that Lien-Da and the Dark Egg Legion are ready to engage the advancing Freedom Fighters and Chaotix, giving Eggman just enough time to press his scarf.

Shadow is dropped off in the mountains and finds Gamma, who explains that he didn't shoot Shadow, being an enemy of Dr. Eggman. Shadow notices that Gamma is rusty and damaged, and tries to send him to GUN's extraction point, but is blindsided by Omega. Gamma flees to the extraction point while Shadow holds off Omega. Suddenly, Shadow is catapulted into the sky after getting stuck in Omega's cannon blasters.

While Shadow is gone, the two robots threaten each other over their radios, but Gamma blasts Omega and sends him to the ground. Gamma tries to calm his brash brother and explain how robots can have souls, but Omega has little care for his weaker brother's words. Shadow rushes back to rescue Gamma, but Omega blasts a full barrage of ammo at Gamma, destroying him. However, upon his destruction, Gamma's soul merges with Omega turning him into a kinder robot, with no intent to destroy the world.

Shadow encourages Omega to turn on the doctor for making him a killing machine and helps him build a grave for Gamma. The duo is taken back to GUN, with Omega joining the team. Later, Shadow is in the GUN rec room with Hope Kintobor and Rouge talking about the recent events. Finally, Rouge explains to Shadow that they will be heading to the Special Zone to retrieve another Chaos Emerald.

Hope and Tower are working on Omega when Hope asks him what he was doing before his mission to stop Gamma. He replied he was on "janitorial duties", claiming when he detected a stain, he "cleansed" it with ammunition. 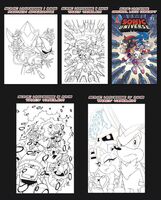