to Cindy Chau and Jerry Chu at SEGA Licensing

“Echoes of the Past Part Four of Four”: This is it - the grand finale! Angel Island is about to be conquered and our heroes are powerless to stop it, having been captured and at the mercy of the Dark Egg Legion! Will a last-minute revelation save or doom our hapless heroes? It all ends with the fight you've been waiting for: Knuckles vs. Dr. Finitevus in a knock-down, drag-out, no-holds-barred ruckus! Don't miss the explosive final chapter to Knuckles' return to the spin-off scene!

Echoes of the Past Part Four

In a room belonging to the Dark Egg Legion, Knuckles, Mighty the Armadillo, Vector the Crocodile and the Downunda Freedom Fighters are being held prisoner; Knuckles, the first to awaken, is bitter at their capture at the hands of Dr. Finitevus. While Duck "Bill" Platypus, the former-Downunda-Freedom-Fighter-turned-Grandmaster, stands nearby, Finitevus explains that he had found the Legion to have a common interest, and thus decided to help them return Angel Island to Downunda's Great Crater; then the Legion will have access to the Master Emerald while he will be free to study it at his leisure. Knuckles doesn't understand why Finitevus would need to further study the Emerald, citing the time the doctor had placed a powerful hex upon the gem, but Finitevus merely laughs at Knuckles, saying there's still much for him to discover. On that note, he leaves, saying that he is going to oversee Angel Island being anchored back into the Crater where it belongs. He and Bill leave the cell, and he instructs Bill to have his men search for Ray and Julie-Su, who are unaccounted for among the prisoners.

Bill, however reenters the cell, and activates a device, and saying that he has "been waiting a long time for this". However, the shackles binding the Chaotix and the Downunda Freedom Fighters open, setting them free. Everyone is confused, and they all want answers. Bill coldly mentions that he'd have preferred to have left Vector chained up, to which the crocodile replies that he's the last one in a position to judge others. As Knuckles and Walt express further confusion over the situation, Barby addresses Bill directly, saying he owes her an explanation especially. Bill apologizes, saying that he'd wanted to let his former teammates know what he was up to, but never had the opportunity to do so. He tells them about how Dr. Eggman made more pushes into the region, and the platypuses had seen this as an opportunity for them to gain power. They went to Bill, as he had led them before (despite having been under the influence of Crocbot at the time). Unable to change their minds, Bill allowed himself to be drafted into serving Eggman. Eventually, the platypuses had received cybernetic upgrades, and a new faction of the Dark Egg Legion was created. Bill regretfully explained that while he purposefully tried to mismanage the Legion, he was also forced to make some progress so as to avoid making his sabotage obvious. Bill apologizes deeply, and Walt comments that Bill's actions were stupid and reckless—and then thanks him for it. Bill and Barby hug, but Bill says that they need to act immediately. In order to keep up the ruse, they decide to pretend to have imprisoned Bill while making their escape; the platypus is left under the "guard" of Guru Emu, who is left with orders to show Bill his "trademark ruthlessness" should he try to escape, prompting Bill to half-jokingly ask if Guru is still a pacifist.

Knuckles asks if everyone's ready to make their move; Thrash grins and claims he's ready to "voice [his] complaints" and proceeds to break down the door with a sonic roar of sorts, scattering the guard outside. Knuckles leads the charge as the combined teams escape; Walt then says that his team will take care of their home while Knuckles and the Chaotix take care of theirs. As the teams split, Vector points out that they need to get to Angel Island but no longer have their Warp Rings. As they consider their options, Mighty peers up at the chained island and casually remarks that he could get Knuckles there. While Vector and the DFF fight off Legionnaires, Mighty gives Knuckles a tremendous boost into the air, allowing the echidna to destroy a Wing Dingo on his way up.

Knuckles manages to land atop Shrine Isle; Finitevus turns around in shock, but then admits that he shouldn't be all that surprised. However, while Knuckles is ready for a fight, Finitevus approaches with open arms, saying that he apologizes for having used Knuckles in the past. He explains that he didn't believe that Knuckles, as a Guardian, would have been able to understand his desire to cleanse the world of its corrupted state, but adds that perhaps now Knuckles will have come to have realized his own potential. He asks Knuckles if he will join him in "saving" the world. He offers his hand to Knuckles, and the Guardian takes a swing at him, saying that the last thing the world needs is another Enerjak. Taken by surprise, Finitevus nevertheless laughs at Knuckles' naivety, saying that while he may have rushed the scenario by using Knuckles (which he chalks up to mere trial and error), there has always been an Enerjak throughout the ages. This comment causes Knuckles to pause; he says that Dimitri was the first Enerjak, and that was a few centuries ago. Finitevus tells Knuckles that he has much to learn of their history; he then offers to provide Knuckles with answers the Brotherhood of Guardians "could not and would not give [him]," mentioning the origins of the ruins found in both the Sandopolis Desert and near the crater, the "secret sins" of Albion and the truth about being such as Enerjak and the "Goddess" Aurora. He puts a hand on Knuckles' shoulder, saying that the two of them together will cleanse the world, that they're so alike they don't need to be enemies, and that he will offer Knuckles "clarity and purity"—anything he wants.

"Anything I want?" Knuckles repeats, clenching his fist while a bitter tear falls. He punches Finitevus across the face, yelling "I want my father back!" He continues to beat the doctor towards the edge, adding that he wants to be able to face his mother and his people again, and that finally, he wants the doctor off his island. However, just before he's about to knock Finitevus over the edge, the doctor catches his first, coldly addressing him as a spoiled, overpowered child with no vision or sense of reality. He catches Knuckles by surprise as he fights back. Separating, Knuckles begins to channel energy from the Master Emerald, saying that while Finitevus may think of him as ignorant, he'll show the doctor how much he really knows. Unimpressed, Finitevus draws his own dark energy from the emerald. The two begin a well-matched fight, Knuckles using Tikal's Prayer to enhance his power while the doctor recites a corrupted version of the chant. The two fight intently, but upon breaking apart, Finitevus, while impressed, says that enough is enough; he opens a Warp Ring directly under Knuckles. Catching the Guardian by surprise once again, Finitevus announces he has one last experiment for the night; what would happen, he wonders, if he were to close the Warp Ring with a person only halfway through? Before he can find out, the doctor is suddenly struck by a laser, fired by none other than Julie-Su, who, with Ray, had been behind the altar. Julie-Su announces that she was just watching Knuckles' back, a throwback to their earlier discussion on the surface; he replies that he knew he could count on her. He grabs the injured Finitevus, saying "Now, like I said before... get off my island." With that, he tosses the doctor over the edge.

Afterward, the Chaotix and DFF meet up on the surface, the latter explaining that they were able to release Angel Island from the Warp Ring-powered chains. Mighty asks what became of the Legion; Wombat Stu says that they're scattered for now, and jokingly adds that when they return, the DFF won't try so hard to crush Bill. Off to the side, Barby reluctantly compliments and thanks Vector; he offhandedly returns the sentiment as they shake hands. Barby slyly adds that "Dad" would be proud; smirking, Vector says, "Meh. Never could please the old man." Ray is intrigued by this conversation, and Vector, exasperated, tells him to drop it. Thrash, meanwhile, asks Knuckles and Julie-Su if they're going back to Angel Island "with all their echidna friends" before remembering that they had explained that most of the echidnas are currently members of the Dark Egg Legion. Julie-Su, looking somewhat distrustful, clarifies that it's only half of the remaining echidnas, while Knuckles adds that the others are "hidden away" to be kept safe. Turning away, Thrash seems to understand, adding that "it would be a terrible thing for the last of yer kind to get wiped out." Knuckles asks what Thrash has planned for the future, and the tasmanian devil says that since it seems the Downunda Freedom Fighters now have things under control, he's off to resume his own quest.

Later, the Chaotix are resting on Shrine Isle, watching the sun rise. Vector grumbles about it bothering him that they were unable to find a body after Finitevus was thrown from the island; Ray says he should know better, thinking it likely that the doctor will return at some point. Off to the side, Julie-Su cuddles to Knuckles, saying she's proud of him, as she understands that Finitevus' offer to reveal his history must have been tempting. Knuckles dismisses this, saying that Finitevus likes to twist things to suit himself, and that even had he told Knuckles nothing but the truth, it wouldn't have been worth giving up everything he already has. Julie-Su says that's good to know, as she plans to stick with him for a long time.

Down in the ruined camp within the crater, Finitevus, his arm bandaged, looks up at Angel Island. He thinks to himself that Knuckles is truly baffling, and that if his way of thinking is really so simple, he's beyond saving. However, Finitevus adds that that doesn't mean Knuckles still can't be useful to him; he still has much up his sleeve, and he's certainly willing to sacrifice Knuckles' life to achieve them.

The fans want to know if using Warp Rings has ever backfired on him. A flashback shows Finitevus writing, while simultaneously using his Warp Ring to get his coffee, but instead gets a soil sample. Finitevus with a sick look on his face, says, 'Occasionally'.

Knuckles begins with stating that nine years ago, his comic was canceled and had to settle for being "an extra". The next panel has Knuckles stating that he now has a whole arc dedicated to him, and "this is only just the beginning." And that soon, Sonic Universe would be his and he would later take over the Sonic the Hedgehog series. The last panel has Mighty and Julie-Su watching him with Mighty saying "Aaaaaaaand he's lost it." while Julie-Su comments "And I thought he was scary as Enerjak", while Knuckles laughs maniacally.

Mighty: As Sonic might say: "Let's do it to it!"
Knuckles: Please don't. It's bad enough when he does it. 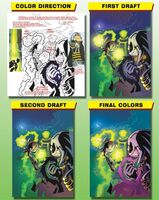