To Cindy Chau and Jerry Chu at SEGA Licensing

“Echoes of the Past Part 3″: New mysteries arise, along with new faces - both good and evil! But is everyone really who they say they are? It's up to Knuckles to figure it all out and rescue Angel Island before it's too late! This issue also features the long-awaited return of the Downunda Freedom Fighters and Knuckles' most unlikely ally - Dr. Finitevus?!

Echoes of the Past Part Three

As Angel Island is seen chained, Dr. Finitevus asks Knuckles what they are going to do. Knuckles, in complete anger, slams Dr. Finitevus into a wall and yells that it was his fault and starts to ask questions. Dr. Finitevus states they are useless questions and asks how he did it when Knuckles was slamming him into walls. He then answers Knuckles's questions while Mighty restrains him. When Julie-Su asks why Finitevus would want to help, and states that he wants to help because he needs the Master Emerald. Knuckles states its safe, but Vector and Ray come through a Warp Ring stating they were ambushed, while Finitevus laughs about the emerald being "safe". Vector questions why they haven't beaten him up yet, and Julie-Su states they are trying to figure that out. Ray and Vector argue while Mighty sees the Wing Dingoes coming. The team, with Dr. Finitevus, then prepare to attack the dingoes.

Before they could act, the Downunda Freedom Fighters appeared on the scene and trashed the robotic canines. After a brief introduction, they retreated to the safety of one of the buildings. The Downunda Freedom Fighters explained how their old teammate Bill had betrayed them to the Eggman Empire, becoming the Grandmaster of the Downunda Dark Egg Legion. After informing Knuckles of Finitevus`s conspiracy Walt offered to "deal" with the doctor for him, after splitting up, Knuckles sent Julie and Ray back to the island to guard the Master Emerald before setting out. Arriving at the crater they found the launchers to use were Warp Rings, confirming Finitevus as the culprit, the Dark Egg Legion assaulted them soon after with an army of Wing Dingoes as back-up. In the Great Crater, the Downunda Freedom Fighters and Doctor Finitevus sneaks past the Dark Egg Legion`s defenses, Thrash the Tasmanian Devil grabs Finitevus and in anger at what the echidna said tries to pummel him. With his warp rings Finitevus diverts the blow, knocking Walt out and sending a charging Stu into a wall. Kicking Thrash roughly in the head after avoiding yet another blow with his rings the doctor is assaulted by Barby who swiftly pins him up against a wall. However, before she attempted to strike him down, she is shot from behind by an unseen assailant.

Meanwhile, on the edge of the Great Crater, the fight is not going well for Knuckles either, with Mighty out cold and Vector suspended in the air by Wing Dingoes while Guru Emu refuses to fight back due to his pacifist views. Taking on the legion of platypus on his own, he is blasted down by several shots to the back. Regaining consciousness, he finds his friends chained on the floor alongside the Downunda Freedom Fighters, as well as Finitevus standing before him, mocking a chained Knuckles.

While fending off the Wing Dingoes, Ray discovers that he could control them as if they were very obedient animals. He commands the Wing Dingoes to roll off the island thereafter.

Dr. Finitevus runs away from Knuckles, mocking his efforts to catch him. He tries to escape through a Warp Ring but it was revealed to be a painted picture on a wall by Charmy, who states that he'll make the most of his cameo. 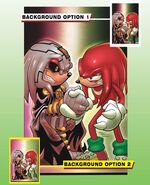 Sonic the Hedgehog comics
Retrieved from "https://sonic.fandom.com/wiki/Archie_Sonic_Universe_Issue_11?oldid=2070687"
Community content is available under CC-BY-SA unless otherwise noted.