The Sonic Super Special Magazine is back with a special issue that'll really stick around! Because you demanded it, this bonus issue of the first ever Sonic comic magazine in Archie history presents your favorite Sonic comic characters as awesome stickable stickers! Featuring pull-out scenes of your favorite sonic zones for you to make your very own sonic adventure come alive! Also featuring tons of comics, news, features, never-before-seen artwork and a brand-new enhanced cover by Sonic artist rising star Lamar Wells!

Trouble in Paradise - Part One: "No Rest for the Weary"

Note: This reprint only includes the first twelve pages of this story.

Note: This reprint only includes the last four pages of this story.

Sonic Rush - Part One of Two 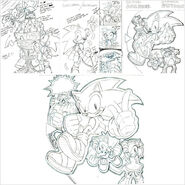 Various concepts for the cover.

The original cover.
Add a photo to this gallery