Sonic Comic Origins continues this month with an ALL-NEW story featuring Razor the Shark! This special tie-in to the Sonic the Hedgehog vol3 graphic novel showcases EXCLUSIVE back-story to the underwater side of the new Sonic Comic universe with one of the most popular new characters to debut in the series! The SONIC SUPER SPECIAL MAGAZINE gives you the world of Sonic the Hedgehog comics as you've never seen it before, with tons of comic stories, special features and exclusive articles on the latest and greatest in the world of everyone's favorite blue hedgehog-hero! Along with the all-new Sonic Comic Origins mini-feature, this issue also features a special look back at the history-making Sonic/Mega Man crossover "WORLDS COLLIDE" storyline, as the sequel, WORLDS UNITE, heats up across the Archie Action Comics line! All this plus the extra features you love, an interview with Sonic/Mega Man Worlds Unite penciller Edwin Huang AND a super special cover featuring art by Sonic comic superstar Tyson Hesse! 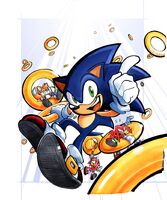 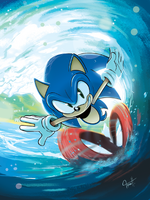 Main cover, raw.
Add a photo to this gallery