In the present day Washington D.C., FBI HQ, two agents named Scolder and Mully are interrogating a mysterious woman named Particle who was found in the ruins of Lucus Air Force Base earlier. She tells them that she was sent into another dimension to retrieve a large power source from somewhere. Upon entering that new dimension, she runs into Sonic the Hedgehog, Tails, Sally Acorn, Bunnie Rabbot, Antoine, and Rotor who are busy searching the ruins of the once great Robotropolis. Using her powers, she knocks them out and teleports to Angel Island where she finds the Master Emerald (with Mammoth Mogul still trapped inside) and Knuckles the Echidna guarding it. She tricks him, knocks him out, and then steals the Master Emerald, leaving the island to fall into the sea. After finishing her story, Particle knocks out Scolder and Mully and then escapes the FBI. Scolder and Mully, having lost all trace of Particle, decide to investigate their other lead which is a business card for a hardware store belonging to a man named James Collins and his son, Eddie , who is secretly ShadowHawk. Eddie tells Scolder and Mully the rest of story picking up where Particle left off.

Upon coming home from his high school basketball game on Halloween night, Eddie sees a bright flash in an alleyway near his father's store. Looking into the alley, he sees Sonic and the Freedom Fighters talking with Spawn, who ignores them and leaves. Eddie, thinking that Sonic and his friends are kids, volunteers to help them get home. But Sally has NICOLE fill Eddie in on the truth about how Knuckles arrived and asked for their help in retrieving the Master Emerald. Astounded, but convinced, Eddie dons his ShadowHawk costume and aids the Freedom Fighters in their search which leads them to crash right through Grand Central Station. Among those who notice them is Savage Dragon and Union who team up and give chase in order to "arrest" the Freedom Fighters and ShadowHawk. Luckily, ShadowHawk remembers Dragon and tells him and Union what is going on. Meanwhile, Sonic and his friends board a subway train where they find the Master Emerald, Particle, and her boss, the mysterious Doctor. The Doctor then tells Sonic and Knuckles that "he and Knuckles will get to know each other well in the future but he and Sonic have already fought before". After these confusing words, Union, ShadowHawk, and Dragon burst and try to knock out the Doctor but accidentally hit the Master Emerald which sends them flying into another dimension, train and all. The Doctor then summons Robotnik's SWATbots lead by one named Isaac and tells them to imprison the heroes and set up the Master Emerald for his master experiment.

Later, Particle demands that the Doctor release her sister whom he kidnapped earlier in order to force her to steal the Master Emerald, but the Doctor just pushes her aside in order to examine a mysterious package that arrived and seems to be singing. Angry, Particle goes into the prison area and releases the Freedom Fighters, Union, Dragon, ShadowHawk, her sister, and a new heroine called Velocity who can run as fast as Sonic. The two teams unite and, under Sally's orders, go to do battle with the Doctor and take back the Master Emerald. Arriving in the main room, they find the Maxx using the Master Emerald as a weapon against the SWATbots and aid him in taking down the Doctor's forces. The Doctor then reveals that he plans to use the Master Emerald to change reality into his own personal reality. Knuckles uses his special powers shown to him by Locke to try and save reality but is mentally attacked by Dimitri. Knuckles manages to block him and uses a Chaos attack to put reality back together, kill the Doctor, and erase the memories of everyone there except Particle, ShadowHawk, Union, Velocity, and Dragon. The heroes then leave Lucus Air Force Base just as Scolder and Mully arrive to find Particle searching for her sister who has gone missing.

Eddie ends the story there leaving Scolder and Mully baffled. As Mully gives the report, it's seen that Sonic and his friends are taking a break, having forgotten everything that had happened in the story. 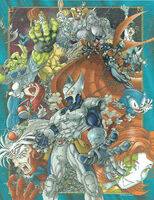 The pin-up included in the issue. Art by Patrick Spaziante and Harvey Mercadoocasio.