To Eddie Mizuno and Stacy Arnold-Strider at SEGA Licensing.

Get ready for fun & adventure—it’s Sonic Super Digest! As the Sonic/Mega Man WORLDS UNITE crossover reaches a fever pitch, see how it all began with a look back at Worlds Collide, the story that started it all, in a special Sonic/Mega Man spotlight feature! Also in this issue is an ALL-NEW edition of SONIC COMIC ORIGINS spotlighting the insidious G.U.N scientist (and villain?!) SNIVELY! This new story fills in some crucial and never-before-revealed gaps in the new Sonic comic universe, and you can ONLY scope this exclusive new story in Sonic super Digest! But that's not all! Don't miss all the classic fun and adventure you love in stories from the comics' 20+ year history! Plus new cover art from Sonic comic super-star Jamal Peppers!

Within GUN headquarters, Madonna Garnet attempts to interrogate Dr. Julian Snively over the incident in Angel Island. Snively is adamant in his loyalty towards GUN as Madonna starts a tape. We find out that Snively was indeed an inventor within the group, though that is one of the few truths within the lies he spreads. He claims that Eggman coerced him into working with him; he did so willingly. He claims Dr. Eggman was the one who lied about the United Federation trying to invade Mobotropolis; it was Snively who did so. He claimed that he was an unwilling follower of Eggman and Walter Naugus and that it was too late to save King Acorn from being tossed into the Special Zone; he stood there and waved goodbye. He claimed to have been forced to build Eggman's bases, including the Chemical Plant Zone and the Death Egg; it was another thing he willingly did.

He talks about how a young Sonic the Hedgehog stopped Eggman's plans, inspired the creation of the Freedom Fighters and, as Super Sonic destroyed the Death Egg. When questioned as to why he did not immediately come back to GUN, he said that it was because he had to keep Eggman's armies in check before he could find the perfect time to do so; in reality, he hid within an Egg Robo body and used a Mecha Sonic to try to steal the Master Emerald.

Annoyed by this, Madonna ends the interrogation and reports to Abraham Tower, revealing that she still cannot catch him in a lie. Tower is non-plussed - "Keep your friends close, and your enemies closer", and he is planning to keep him in a spot where he is very close.

Shadow Fall Part One: Into the Unknown 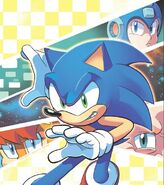 Front cover, raw.
Add a photo to this gallery