The Forbidden Zone Part Three of Three: The Many Faces of the Truth

The story begins with the Royal Secret Service and Elias trapped in floodwater trying to hold onto the trees. They notice Locke's craft up in the sky and Elias is thrilled that all they needed was faith. Suddenly, the rope keeping Heavy and Bomb from moving through the water snaps. Elias,Geoffrey, Hershey, Valdez and Wombat Stu are saved by Locke using his chaos powers to raise them from the water. They follow Heavy and Bomb as they approach a waterfall and Locke saves them with the same technique. On the craft, Lara-Le is unable to understand how Locke is able to use his powers and still made a mess of their marriage. Locke adds that he has spent many nights wondering about that.

Back in Haven, Knuckles has arrived and noticed by Sabre, Thunderhawk, Sojourner, Spectre, Archimedes and Moritori Rex (disguised as Tobor.) Thunderhawk yells that this is a disaster and that Knuckles is too undisciplined to be there. Sabre tells them that they may not have to listen to their ways anymore, but starts an argument with Sojourner. Spectre agrees with Sabre that it is fate and that they should start re-evaluating their priorities. Moritori Rex stays in the background thinking that his true identity will be revealed if Knuckles talks and that he has to do something. Archimedes is about to tell Knuckles, but he doesn't want to believe him if he has been keeping this from him. Sabre introduces himself to Knuckles as well as the many generations of the Guardiansending at Tobor. Knuckles decides to play along with his identity, while Moritori Rex ponders ways to kill him. Tobor says that Knuckles might be woozy and offers to take him to the sick bay. Sabre agrees and he is escorted down. They head into the sick bay and Knuckles is shocked seeing Hawking on life support. Moritori Rex prepares a needle while stating that Hawking hasn't recovered since Echidnaopolis was restored. They believe that his recovery hasn't remained to be seen.

On Locke's craft, the Royal Secret Service and Elias are cleaning themselves off. Geoffrey asks Locke who he is and Elias tells them his name and that he is one of the Brotherhood. Locke decides to give Geoffrey the answers he wants and Lara-Le whispers that he wasn't this communicative in their marriage. Locke tells him that he wasn't there, but remembers the records behind the crash of Queen Alicia's craft. After it was shot down, Sabre, Sojourner, Spectre and Thunderhawk discovered the craft. They opened the craft to find Ian St. John dead while Sojourner found a baby still alive and Thunderhawk noticed Overlanders coming. Sabre approached the Overlanders, who demanded the right to inspect the craft. Sabre tells them that they should respect their neutral state in the war with the House of Acorns and tells them that everyone aboard was killed. The Overlanders left as Spectre discovered Queen Alicia barely alive under rubble. They decided that there wouldn't be trace of the incident and cleaned up, buried the bodies while Elias was raised in Haven and Alicia was placed in a stasis tube. Locke tells them that the queen was barely alive and couldn't tell King Acorn that either of them were alive, because of the Overlanders. He tells them that the Brotherhood raised Elias, who turned out to be a prodigy, until they left him to venture on his own. Geoffrey asks about Colonel Sommersby and Locke states that he was an oversight. They were prepared to stop him from being discovered, but he was picked up by King Acorn's rescue team. Receiving most of this information from Tobor, Geoffrey asks if he could question him about all of this. Locke approaches the wall of fire and disappears through it to Haven.

In the sick bay, Moritori Rex is trying to attack Knuckles with the needle. Knuckles stuns him and reveals that he knows who he really is. Moritori Rex jumps up, only to be forced back down by Knuckles. They begin fighting as Locke's craft lands in Haven. Locke's emergency beacon sounds again, but Lara-Le refuses to let him leave her behind and leaves with him. Elias is given the rod to take Geoffrey and his team to Sabre and to tell Knuckles "I'm sorry". Geoffrey believes that Knuckles is a part of the Brotherhood, and Elias explains the back story of the House of Edmund protecting the Floating Island with each generation.

Meanwhile, Moritori Rex is fleeing from Knuckles through the same corridor as the Royal Secret Service when he fires his optic blasts down the hall. Knuckles manages to knock him out when they notice part of the hallway closing behind him and Archimedes. Knuckles manages to make it through the opening, questioning Archimedes why they couldn't have teleported through. At the monitoring station, the Brotherhood are revealed to have isolated Tobor and questioning his loyalty. In the hallway, Knuckles and Archimedes meet up with the Royal Secret Service and Elias. He tells them about the Dark Legion made him angry when Sabre, Sojourner and Spectre meet with them. They reopen the barrier to see that Moritori Rex has disappeared. Nearby, Locke saves Remington, his troops, Wynmacher and Julie-Su from their wrecked craft. As he rescues them, he is discussing Knuckles with Lara-Le who states that Knuckles needs a father. Locke thinks that they are about to start a fight when he greets the echidnas that he rescued.

Day three, Knuckles, Elias and Geoffrey arrive in the sick bay and notice Alicia's body in the stasis tube. Elias tells them that they couldn't do anything for her with only one option. They preserved her until a cure could be found and Geoffrey tells him that he's been ordered to take her back to Mobotropolis. He asks Elias if he wants to stay there, but Elias answers that he's got a father that he would like to know. Knuckles in the background ponders that he can finally get the answers that he wants. 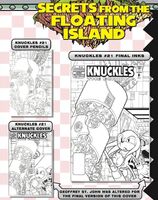