The Chaotix Caper Part Two of Three: A Tenuous Grip on RealityEdit

The story begins with Charmy having a flashback of his home at the Golden Hive Colony. He is asleep in his bed when his father, mother and sister appear to prepare him for the acknowledgement ceremony. Charmy looks at himself in the mirror with his crown, showing him as the prince. Charmy takes off the crown and smashes it on the ground upset. He runs out of the room in tears yelling that he never wanted to be a prince. The flashback becomes more chaotic and Charmy continues to run through the castle while bumping into his butler, Jeepers. He yells for everyone to go away and flies out of the castle. He continues to hallucinate when Charmy is revealed to be at the hospital, along with the rest of the Chaotix. One of the doctors heads into the waiting room, where Julie-Su and Remington are waiting. He gives them the news that the Chaotix are going to recover when he departs. Julie-Su is still confused why it was only them that were affected. Remington discuss the situation as they head out of the hospital. Unable to place the pieces together, Remington and Julie-Su drive off towards Happyland Amusement Park to investigate.

At Happyland, Renfield the Rodent is in his office with Downtown Ebony Hare, Foxy Reynard and Blackjack. Ebony brings to his attention that the special sauce in his chili dogs are ruining the market. Renfield sneakily presses a button underneath the desk and brings in his henchman, Ripper to give them a threat. Blackjack runs towards Ripper and takes him out easily. Ebony grabs hold of Renfield and demands that he tones the sauce down so that they aren't caught and to take over the business.

Meanwhile, Charmy has another flashback showing him running away from Saffron. As Charmy flies off, he encounters Mello and talks to him about the ceremony. Charmy decides that he is going to check out the Floating Island to travel solo for a while and Mello promises that he will keep his secret. He travels over the island and encounters Mighty and introduce themselves. At the hospital, Mighty wakes up and decides to get his blood circulating by raising the bed, along with the nurse over his head as the doctor comes in. At the theme park, Renfield and Ebony notice on their security cameras that one of their workers is being questioned by Julie-Su and Remington. Renfield runs out of his office and stops them from questioning the worker. Remington realizes that he is management and brings attention to complaints about food poisoning. Renfield argues that they haven't seen anyone dropping from indigestion and Julie-Su agrees with him. They decide to continue their search with Renfield sighing with relief.

In Haven, Sabre and Locke are watching a fight between Knuckles and the Bear Pack from their monitors. They are stunned watching the battle as Knuckles is displaying raw power that they haven't seen before, and sends the Bear Pack away in a powerful vortex. Locke believes that they should send Archimedes to help guide him while Sabre believes that a better candidate can be found in the mirror. At the hospital, Vector wakes up with the nurse startled, running out of the room believing that he would bite her. Vector notices on the bed next to him and sees Charmy twitching wildly in his sleep with more doctors rushing into the room.

In the streets of Echidnaopolis, General Von Stryker climbs into the taxi that Harry is driving. He demands that Harry rejoin the army, and pays no attention to Harry's protests.. He climbs out of the taxi into the night as Julie-Su recognizes Harry's cab, and she and Remington meet with him. Remington decides to make a deal with him that if he can provide information to them, he will help him. Harry knows who they are looking for responsible and drives them to their hangout. Driving back from Happyland, Ebony, Foxy and Blackjack arrive at their hangout talking about a girl they have captive. In the taxi, Remington watches the scene with Harry reminding him about helping him with unpaid parking tickets. Inside the building, the girl is revealed to be Julie-Su with a blindfold on as Ebony and Blackjack head through. He tells her that he isn't fooling her and demands to question her on why she is here. Back in the taxi, the receiver stops on Julie-Su with Remington panicking and regretting that he shouldn't have let her volunteer to do this for them. The gang take her onto the rooftop with Blackjack pushing Julie-Su off the building to get the answers out of her. 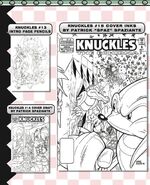 Cover draft from Knuckles Archives Vol. 3.
Add a photo to this gallery

Intro page sketches from Knuckles Archives Vol. 3.
Add a photo to this gallery

Sonic the Hedgehog comics
Retrieved from "https://sonic.fandom.com/wiki/Archie_Knuckles_the_Echidna_Issue_14?oldid=2070074"
Community content is available under CC-BY-SA unless otherwise noted.