Archie Knuckles Archives Volume 6 was the intended sixth and final volume of the Knuckles Archives graphic novel series published by Archie Comics. This volume would have contained reprints of stories from Knuckles the Echidna #28-#32. The volume was intended to release but was later removed from listings entirely after numerous delays.

'Archie Comics' hugely popular spin-off series continues in high quality graphic novel format. It's been a long, strange journey for Knuckles. Once the lone Guardian of Angel and last of his kind, he has been thrust back into his long-lost culture, joined in age-old battles, and learned the secrets of his forefathers! Knuckles now tangles with matters of the heart as he confronts his feelings for Julie-Su. He must choose between his duty and his friendship with Sally Acorn. And he must confront a terror from his childhood... All this and more in this final installment to the Knuckles Archives! 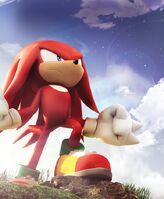