An Aquis, from Sonic the Comic #7. Art by Richard Elson.

The Aquis is a character that appears in the Sonic the Comic series published by Fleetway Editions. It is a seahorse-based Badnik variant created by Dr. Ivo Robotnik. These were among the first generation of Badniks Robotnik produced and have a habit of relentlessly pursuing their selected targets.

A pair of Aquis Badniks were subordinates to Arachbot in the Labyrinth Zone when he captured Tails. They were defeated by Sonic and their organic batteries were freed.[1]

A lone Aquis was left free in the Oil Ocean Zone during a cleanup operation by the zone's workforce. When the same Aquis Badnik discovered Sonic in the zone, it started attacking him, chasing him down into the oil pool. The Aquis then ignited the oil, making everyone think that the Badniks had finished the hedgehog completely. As it turned out, the Aquis made a fatal mistake and drove Sonic into turning into Super Sonic. The Aquis attempted to flee but Super Sonic easily destroyed it.[2] More Aquis in the Oil Ocean Zone were later destroyed by Sonic when he scoured the Zone for a bomb.[3]

Aquis can fly at high speeds and shoot fire from their mouths. 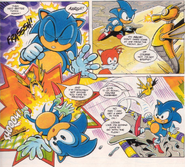 Retrieved from "https://sonic.fandom.com/wiki/Aquis_(Sonic_the_Comic)?oldid=1732649"
Community content is available under CC-BY-SA unless otherwise noted.