Aquatic Relix Zone is the fourth zone of Sonic the Hedgehog Pocket Adventure.

Aquatic Relix Zone is a remake of Aquatic Ruin Zone from Sonic the Hedgehog 2, though it features several tweaks to match the limitations of the Neo Geo Pocket Color.

After Sonic lands his final hit on Knuckles, the victor is clear as the echidna falls to the ground. Suddenly, Dr. Robotnik descends into the area and snatches the Chaos Emerald that Knuckles was guarding. With a powerful uppercut, Knuckles then sends Sonic flying up into the sky, where he lands on the wing of the Tornado.

This Zone, along with Secret Plant Zone, are the only levels in the game which feature underwater sections that the player can drown in.

At the end of the Act, Sonic falls down to find Knuckles the Echidna, who initiates a duel.

The boss of Aquatic Relix Zone is Knuckles the Echidna, who will engage in a physical fight with Sonic. During this boss battle, Knuckles fights with all of his trademark maneuvers: he will guard with a flurry of punches, glide through the air, and Spin Dash. Trying to attack while he is guarding will result in Sonic getting knocked backwards. After six hits, Knuckles will be defeated. 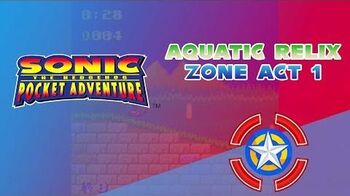