Knuckles in Aquatic Mine, from Sonic Adventure 2: Battle.

Abandoned mine located within the vicinity of Pumpkin Hill.

The Aquatic Mine is an abandoned coal mine located in the vicinity of Pumpkin Hill. In keeping with the imagery developed in Knuckles' previous stage, many of the symbols found about the mine seem very Halloween-themed. This level is also infested with Boos, enough to the point that a warning sign has been posted. It appears that at some point during its operation, the mine flooded.

There is apparently a connection between the Aquatic Mine and the sewers of Central City, as Knuckles emerges from a manhole in said city and simply states that he must have "gotten lost in the mines."

Knuckles discovers the Aquatic Mine in his search for the Master Emerald shards. After finding all the Emerald Shards however, Knuckles gets lost in the mines. Eventually, he ends up in the sewers of Central City, where he bumps into Sonic, Tails, and Amy, and joins them on their adventure.

There are three Ball Switches present in the level that affect the height of the water within the mine, with adjustments being necessary to reach the higher levels of the forlorn place.

For some quick Rings, the player should collect all the ones around them at the start of the level, then go up to the top floor and hit the 10 Rings Item Box. The rest of the Rings can be found scattered throughout the level, with a notable amount placed on the path leading to the Air Necklace.

From the beginning of the stage, the player should go up the center structure to reach the top floor and keep the water level at one. On the side where a 10 Rings Item Box and a Hint Box can be found, the player will find an Ancient Ruin behind a pile of wood. They must play the Mystic Melody on it, and then will see a door open. The player should go inside and Swim down, which will take them to the room where the Boos are. They must find the two skulls statues in the corner, then look for a shadow on the ground, or Rings up higher. Once the player finds these, they should take them up, which will lead them to a tunnel. The player must go to the end of the tunnel (there is an Extra Life behind the iron ball) and take the Pulley up, and the Chao can be found just ahead.

This mission is the same as the first, except with a time limit. The player must work quickly to find the missing Emerald Shards.

As with all treasure hunting stages in Sonic Adventure 2, the Emerald Shards are in three set locations, and are as follows:

There is an optional Level Up Item available for Knuckles in Aquatic Mine called the Air Necklace. This allows him to stay submerged for any period of time without drowning. When returning to this level to complete further missions, this Level Up Item is very helpful.

To the left of the Wide Spring, there is a mineshaft which has Big inside it. However, Big only appears inside the mineshaft when the water is set to the first or second level.

In the Sonic the Hedgehog comic series and its spin-offs published by Archie Comics, Aquatic Mine first debuted in Sonic Universe #64, where it is called "Aquatic Mine Zone". It also appears in the post-Super Genesis Wave timeline. 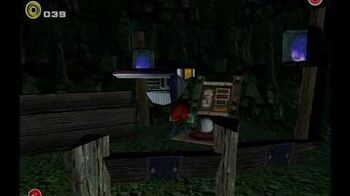 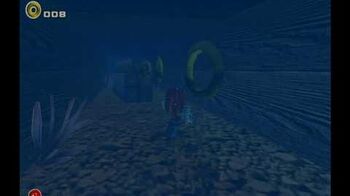 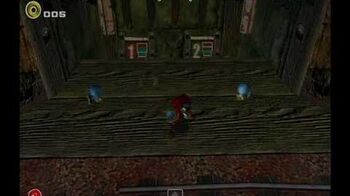 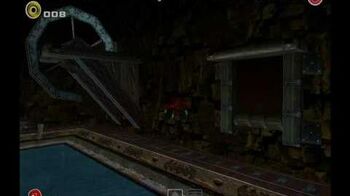