The canoe half-pipe is a thrill only found in this gorgeous aquatic city.

Aquatic Capital is the fourth course from the Heroes story in Sonic Riders: Zero Gravity. It is a city lying in the vicinity of Monopole, next to Dr. Eggman's MeteorTech Premises. It gets its name from its location and the fact that there is water everywhere. This race course features more wall-to-wall gravity power.

Amy is being chased by Storm because he wants the Ark of the Cosmos that Amy has. Sonic, Tails, and Knuckles must race against the clock (the time limit is 3:24:00) to get to Amy before Storm does.

The race takes place in a futuristic city resembling a water world. After being greeted by geysers at the starting line, the character racing encounters the first trick ramp which if Gravity Control is used in the mid-air, he/she will be able to access a waterslide as a shortcut. If the character misses this shortcut, the character may either keep to the left to access either a wall-route or a grind section, or keep to the right moving through a cemented path where a spring can be used if the character is on foot/Attack-mode.

If neither of the three above-mentioned shortcuts are taken, these two paths will eventually form an intersection with two more paths to take, one which leads to an air ride section (if the character raced on the water-slide, he/she will be led to this intersection), or a barricaded shortcut recommended for Bikes and Wheel gear users to smash through. Whichever of the above-mentioned shortcuts is taken or not taking a shortcut will lead the character to a sharp 90 degree turn requiring Gravity Control for this type of curving. If the character is on-foot/Attack mode, the character will be able to ride on a gondola through an isolated waterway from the main path which from that sharp curve, the character would have to pass through a Trick Ramp and depending on how well the trick is performed will decide on whether the character will access the lower or the upper waterslide (note that the upper waterslide is always the shorter route than the lower waterslide). While on the waterslides, there are gondolas that also ride on either waterway which will damage the character (losing rings) if bumped into. Only the character SCR-GP can damage the gondolas, as it stays in its wheel/bike-type ball mode throughout the entire slide. 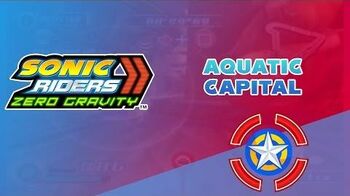