The Avatar in Aqua Road.

A jungles set ablaze from warfare, with myriad of twisting flumes of water

Hidden in the mystic jungles set ablaze from warfare, the rookie discovers a myriad of twisting flumes of water. Can they navigate through the warped wet works to reach the depths of the jungle?

Aqua Road[1] (アクアロード, Akuarōdo?) is the fourteenth stage in Sonic Forces, and the fourth stage in the game to be played as the Avatar.

Located in the Mystic Jungle, this previously unspoiled wilderness sporting the remnants of an ancient civilization and a warped network of water flumes is now having its ruins converted into a casino by Dr. Eggman.[2] In addition, the area is damaged from the war between the Eggman Empire and the Resistance. During the events of the game, the Avatar came here to investigate two lifeform readings.

Similar to the other areas within the Mystic Jungle, Aqua Road is set in a brown mountainous region at night during a full moon. It should be noted that the mountains in this stage are rather blocky, much like in Green Hill, and there are evidence of a recent rainfall. Between the mountains on the bottom are a massive lake and numerous rivers. Also, growing on the region's dry land and mountains are lush tropical trees with round tree crowns, grass and fern-like bushes.

Also found in Aqua Road are ancient ruins, such as roads, pillars, road gates, crumbling walls, temples and still-burning torches, most of which are overgrown with plants. All of these ruins have yellow runes/murals that glow.

As a result of Dr. Eggman's actions, the majority of the ruins have been converted into casinos. Numerous neon signs in different shapes and colors have been added to the ruins, and ancient temples have been converted into neon palaces. Ancient pillars have similarly been turned into palm-shaped street lights. Also, after Eggman's attack, many of the trees in Aqua Road have been set ablaze, turning huge sections of the forest into burning infernos. The stage also has a myriad of twisting half pipes made from tree trunks with water flowing through them and vines surrounding them, forming a warped network of waterslides.

Aqua Road was originally an ancient ruin. After Dr. Eggman settled in Mystic Ruins though, he began construction on the area to turn it into a casino.[2]

When the Resistance detects two lifeforms near Dr. Eggman's abandoned laboratory in Mystic Jungle, the Avatar is sent to Aqua Road to check it out. Upon the Avatar's arrival in the jungle, Amy, Knuckles and Silver discuss the lifeforms they detected, with Silver worrying that if the intruders are not robots and part of the Eggman Army, then the Avatar might be in over their head. Amy and Knuckles soon after talk about how remote the laboratory's location is, which might mean it was conducting secret experiments that Eggman did not want anyone to know about before instigating the War to Take Back the Planet. When the Avatar later ends up on a waterslide, Knuckles expresses a bit of jealousy, although he tries to hide it from a prying Amy.

As the Avatar nears the laboratory, Amy tells them that Resistance reinforcements are on their way to back them up. Arriving at the laboratory, the Avatar finds a Phantom Ruby prototype (which was dropped by Infinite earlier on) before meeting Tails and Sonic's classic counterpart. Tails and Classic Sonic are soon after brought to the Resistance HQ where Sonic, Tails and Classic Sonic share a common reunion. Being the bearer of bad news however, Tails reveals to the Resistance that he has been told by Eggman himself that he has a plan that will wipe them all out in just three days. Sonic however, is sure that they can make a difference in that time and stop him. With Tails and Classic Sonic reunited with the rest of the Resistance, the Mystic Jungle is freed from the Eggman Empire's control.

Aqua Road features a number of waterslide sections. Whilst on the waterslides, the Avatar moves forward automatically. The player will also have limited movement abilities and must avoid falling off the edge of the slides and into bottomless pits. Occasionally though, the player can save themselves when they fall off the slides by falling down on another slide below. While sliding, the player must also be wary of outdated Moto Bugs, who drift down the slides alongside the player; if the Avatar collides with a Moto Bug, they will get knocked around, making navigation on the slides more difficult. Also, while colliding with a Moto Bug will destroy it, a new one will soon after arrive to take the destroyed one's place. In some places, there are also thorn bushes that will damage the Avatar in case they touch them.

Like other Avatar stages, Aqua Road features Wire Targets for the player to swing around on using the Wire Attack, and numerous Wisp Capsules with Wisps for fueling the Avatar's different Wispons. However, any Wisp Capsule containing Wisps that do not match any of the Wispons the player has currently obtained will be rendered intangible and transparent until the player obtains their Wisp's associated Wispon. This means, for example, that if the player does not have an Lightning Wispon, then the capsules with Ivory Wisps will be unobtainable.

When beginning Aqua Road, the player will arrive at a fork in the road, with the road on the right being unveiled when a wall into a hidden passage suddenly collapses. Should the player choose the route on the right, they can collect a Red Star Ring when emerging from the tunnel and landing on a waterslide. Should the player choose the route on the left however, they will arrive at the same waterslide in the same manner, but without any goods to show for it.

While moving down the slide, a fork in it will appear. Both of these slides will eventually rejoin near the end of them, although the slide on the right will have a Red Star Ring moving along it. Regardless, upon reaching the end of the slide, a series of Springs will sent the Avatar to a two-leveled plateau with lots of enemies. After climbing it, use the Ramps ahead to get launched into the sky. The Avatar will then promptly swing down on another waterslide that splits into three slides a little ahead. All of these slides are narrow and have a lot of sharp turns, making navigating them somewhat difficult. Upon leaving the slides, the Avatar will automatically swing across a river. Upon landing on solid ground again, continue forward to find Eggman's laboratory and the goal.

The Number Rings are easily spotted and are somehow easier to get. All five show up on the first myriad and end before the path splits.

The Silver Moon Rings are on the forward path after the path splits, where the second RSR is. These will probably take a few attempts to get unless you're fairly lucky on your first time with those annoying robots bumping you around. 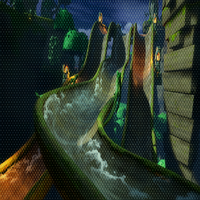