"Anton" redirects here. You may be looking for Anton Veruca.

For other uses, see Anton (disambiguation).

A trio of Antons, from the Wii U version of Sonic Lost World.

The Robot Ant wanders left and right on its single wheel, scouting its territory for invaders!

The Anton[1] (アントン[2], Anton?), also known as the Robot Ant,[3] is an enemy in the Sonic the Hedgehog series. It is a mass-produced, ant-based Badnik model created by Dr. Eggman.

Antons are based on a terrestrial ant. They possess blue robotic armor with an upstanding ant-like upper body and two thin arms. Their heads on the other hand are large with wide eyes, two yellow antennae, and gray mandibles. They are capable of moving around thanks to a single thick yellow wheel on their bottom and two small engines with exhaust pipes on the sides.

In Sonic the Hedgehog CD, Antons,[1] (アントン[2], Anton?) also referred to as Robot Ants,[3] appear as enemies and are encountered in Palmtree Panic. In gameplay, the Antons simply roll back and forth along the ground within their designated area, never leaving the platform upon which they move. While they can hurt a playable character through physical contact, they possess no offensive attacks and can easily be avoided and destroyed. When they are seen broken down due to age in the Bad Future pf Palmtree Panic Zone or sometimes in the present, these Badniks move considerably slower and have a depressed look on their faces. Regardless, they can be easily defeated by using the Spin Jump, Spin Attack, or Spin Dash. Also, like every Badnik in the game, the Antons are powered by Little Planet flower seeds which will pop out of them when they are defeated.

In the Wii U version and PC version of Sonic Lost World, Antons appear as enemies once more. In this game, they appear in Dessert Ruins Zone 3, often in single-file groups of three. This time around though, Antons are powered by Animals instead of Little Planet flowers.

In gameplay, Antons move back and forth one after the other within their designated area. Should they make contact with the playable character, they will catch them and carry them on their their back, only to self-detonate after driving a short distance, with the blast dealing damage to the playable character in the process. The only way to destroy a Anton is to hit it with the Flying Kick. In addition, hitting a leading Anton into its group with the Flying Kick will defeat them all in one stroke. Hitting a Anton with the Homing Attack or any other move will result in the Anton, after receiving a blow, leaning slightly forward, moving faster, and grabbing the playable character. Also, upon their destruction they release their Animals.

Antons are able to self-detonate.

In the Sonic the Hedgehog serialized manga published by Shogakukan, Antons are a Badnik variant that Sonic and Tails once got attacked by.

In the Sonic the Comic series published by Fleetway Editions, the Antons are a part of Dr. Robotnik's Badnik army, although they only made a few appearances during the comic's run. Depending on the artist, the Antons' design would differ between their appearances.

In the Sonic the Hedgehog and its spin-offs published by Archie Comics, Antons form part of Dr. Eggman's Badnik Horde. They accompanied Dr. Eggman to Palmtree Panic, but were defeated by Sonic.

In the Sonic the Hedgehog comic series and its spin-offs published by IDW Publishing, Antons form a part of Dr. Eggman's Badnik army. Their past is virtually identical to their game counterparts', up until after the events of Sonic Forces. They were first seen attacking Sonic and Espio on their way to Windmill Village. 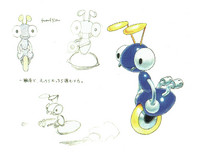 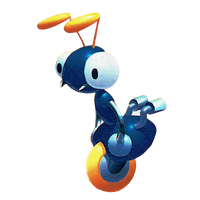