This article is about the Zone in Sonic the Hedgehog 3. For other uses, see Angel Island (disambiguation).

Sonic and Tails in Angel Island Zone. from Sonic the Hedgehog 3.

A lush, tropical jungle, that was eventually set on fire by one of Robotnik's Fire Breaths.

Welcome to the Floating Island. Things will really heat up once Dr. Robotnik sets fire to this area of the island. Beware of the Flying Battery blimp.

Angel Island Zone is a large jungle system located near the coast of the Floating Island. Having been compared to a tropical paradise, the area is full of greenery,[2] with exotic plants and palm trees decorating it. There are also many waterfalls and water pools. Unstable wooden bridges and large trees are present as well.

After being settled on fire by Dr. Robotnik's Fire Breaths, most of Angel Island Zone started to burn down. The background in this section is full of fire, and most plants are burning down.

With Tails having detected strange energy readings coming from the Floating Island with his Jewel Radar, Sonic traveled to the island with Tails, with Angel Island Zone being their first designated destination.[3] Upon approaching the island, Sonic used the Chaos Emeralds he had collected earlier to turn into Super Sonic and storm the island, only to get knocked out of his Super State by a cheap shot from Knuckles the Echidna, the guardian of the Floating Island, who subsequently stole the Emeralds and ran off.

Making their way through the Zone, Sonic and Tails witnessed Dr. Robotnik's Fire Breaths settling Angel Island Zone on fire with a barrage of fire bombs. After destroying one of the Fire Breaths, they found Robotnik's Flying Battery blimp trying (in vain) to stop them, and shortly afterward, they had a showdown with the doctor himself in his own Egg Scorcher Mk III. After defeating him, the heroes found Knuckles again, who triggered a trap that sent them plummeting into Hydrocity Zone.

Much later, Knuckles was resting in Angel Island Zone when he was attacked by an EggRobo, who dropped a bomb on him. Thanks to his toughness or sheer luck though, Knuckles survived this. Infuriated, he made his way through the Zone, where he witnessed Dr. Robotnik's Fire Breaths settling the area on fire once again. After destroying a Fire Breath, he found the Flying Battery blimp trying to stop him. Afterward, he found the EggRobo that attacked him earlier in the Egg Scorcher Mk III. After defeating the robot, Knuckles went to Hydrocity Zone.

Angel Island Zone is a slow-paced Zone, often giving the player some basic platforming to introduce them to the game. Despite this, some basic gimmicks, such as loops and vines, are present.

Act 1 is less linear than the first half, having many alternate paths that feature more secrets than others. There is also a giant tree trunk, which the player can only pass through if they build up enough speed. After the Fire Breaths set Angel Island Zone on fire, the Act will become more straightforward. Act 2 features more platforming and makes use of simple puzzles involving switches. It is also common to find tunnels in this Act.

Angel Island Zone Act 1 is the first Act in the game, and as such the easiest. Most alternative routes at the start of it are located in the top part of the Act, and are as such needed to be reached through basic platforming, sometimes rewarding the player with monitors. The bottom sections, on the other hand, are more straightforward and shorter. They also feature more enemies and less secrets.

Later through the Act, the player will run through the inside of a giant tree trunk to find many Fire Breaths settling the Zone on fire via a rain of fire bombs. From this point on, the Act will be more straightforward, though with a few secrets. Eventually, the player will be taken to the bottom part of the Act for then later to go to the top part of it. There, they will fight a Fire Breath and finish the Act.

As Knuckles, Angel Island Zone Act 1 remains mostly the same, though towards the end of the act, Knuckles cannot finish the act it in the same way as Sonic or Tails due to his lower jumps. Instead, Knuckles will have to take a path sealed by stone pillars exclusively for him, which leads him to his version of the Fire Breath fight.

In Sonic and Tails' version of Angel Island Zone Act 2 is similar to Act 1. Water pools are more prominent here than in the previous Act. Sometimes, the player also has to use switches to open paths. At the end of the Act, the player will find the Flying Battery blimp trying to attack them, launching missiles that are harmful for the playable character. Afterward, they will spot Dr. Robotnik in his Egg Scorcher Mk III in the background, whom they will later fight at the end of the Act.

As Knuckles, Angel Island Zone Act 2 is an entirely different level with some sections requiring Knuckles to glide and climb up walls to proceed. Unlike Sonic and Tails, Knuckles does not encounter the Flying Battery blimp along the path leading to the fight against Robotnik's Egg Scorcher Mk III.

The sub-boss of Angel Island Zone is Fire Breath, a hovering robot that is equipped with a flamethrower and rocket launchers. It needs to be hit six times to be destroyed.

In Sonic Jam for the Game.com, Angel Island Zone is where the Sonic the Hedgehog 3 portion of the game takes place. 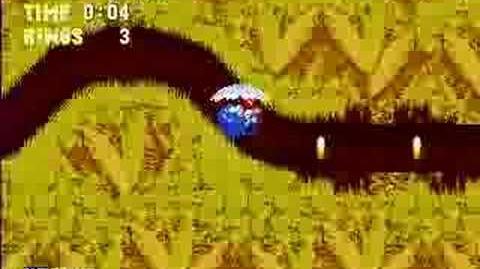