Angel Island, also originally known as The Floating Island, is a location that appears in the Sonic the Hedgehog comic series and its spin-off comic series published by Archie Comics. It is a continent that flies high above Sonic's World thanks to the mystical power of the Master Emerald. For countless years, Angel Island has been largely removed from the world's problems, except from attacks from Dr. Eggman. Only a select few know of its existence and even fewer still has yet set foot on it. It is protected by its Guardian, Knuckles the Echidna, the last of the echidnas.

In the Pre-Super Genesis Wave timeline, Angel Island was originally a part of the continent of Downunda until the Echidna living in the city of Echidnaopolis decided to use the powers of twelve Chaos Emeralds to lift their city off the surface to avoid destruction by a White Comet. Since then, Angel Island has been the home of many different species, the two largest being the Echidnas and the Dingoes. After the Doctor Eggman-backed Dingo Regime's mass genocide under Kage Von Stryker, the Echidna population was left in shambles. Those who survived were relocated to Albion by Enerjak, to ensure the survival of their species, while the Dingos themselves were disarmed and exiled to Sandopolis. At that point, it was largely uninhabited except for the Dingoes, agents of the Knothole Freedom Fighters, Chaotix and the island's last Guardian; Knuckles the Echidna.

Hundreds of years ago a group of Echidnas known as the Knuckles Clan, having set out from their homeland of Albion, eventually settled in a region of Downunda and built the city of Echidnaopolis.

The technologically-advanced city thrived on the mainland until roughly 600 years ago when the two scientists Jordann and Kayla-La discovered the White Comet that would soon impact directly on the city. Desperate to save their home, Kayla-La developed and proposed a plan to physically move the city out of harm's way using the power of Chaos Emeralds. After excavating twelve of the rare and powerful gems, the Chaos Chamber was established to harness the energy of the emeralds. After the Fire Ants dug under the foundations of the city, separating it from the planet's surface, Echidnaopolis lifted into the sky, becoming the Floating Island. A large crater marks its former place in Downunda.

Four generations later, the great-great grandsons of Jordann and Kayla-La, Edmund and Dimitri, sought to return the city to its original site on the planet. While the energies of the Chaos Emeralds were not completely understood, Edmund and Dimitri theorized that, should the energy be gradually drained, the decent of the island could be controlled and allow it to slowly, safely return to the mainland. The two developed a device called the Chaos Syphon, capable of draining away Chaos energy, and proposed their plan to the gathered council. However, due to the current High Councilor's personal political goals, as well as the untried nature of the plan, the proposal was rejected.

After Dimitri's presumed death when his Dark Tower collapsed on him, and the High Council's decision to ban excessive technology, those opposed to this and loyal to Dimitri formed the Dark Legion. The Legion was transported to the Twilight Cage by the Guardian Steppenwolf, as they initiated a civil war with the remaining Echidnas. After this, the Dark Legion had occasionally managed to break through the dimensional barriers and attempt to retake Echidnaopolis, though each time they were repelled by the current Guardian.

Angel Island's two primary species were the Dingoes and the Echidnas. The Dingoes, an aggressive militant race, attempted numerous times to wipe out their echidna counterparts. After stealing a cache of nuclear weapons, the Dingoes attempted a nuclear strike on Echidnaopolis. The city was saved by an energy dome erected by the current Guardian of the time, Hawking; however, the fallout spread across the island. Both Echidnaopolis and the Dingo cities, as well as other civilizations on the island, were then transported to their own zones where they were protected from the harmful radioactive fallout until Hawking and several future Guardians could restore the island to health. Echidnaopolis was returned to the Mobius Prime when the dimensional barriers were weakened by Dr. Ivo Robotnik's firing of the Ultimate Annihilator. The Dingoes were also returned to the Prime Zone, their city however remained in its own zone.

Almost two years after the Echidnas and Dingoes had been returned to Angel Island from their Pocket Zones, the dissatisfied Dingoes under the new leadership of Kage Von Stryker turned to Dr. Eggman for support. In exchange for becoming Eggman's enforcers and servants to the Eggman Empire, the Dingoes received technology, supplies and assistance from the Eggman Empire to enslave the Echidna population and completely take over the island. With Sonic the Hedgehog believed dead and far off in space, and Knuckles the Echidna on the surface of Mobius, the overwhelming Dingo forces successfully took control of Angel Island.

After nearly two years of Dingo oppression, their regime and Dr. Eggman's hold on Angel Island would come to an abrupt end. Knuckles, under the influence of Dr. Finitevus, became the Chaos demigod Enerjak and used his near-omnipotent powers to rid the Dingoes of their technology and banish them to the desert of Sandopolis. The Echidnas who were still alive were then transported to the ruins of Albion where they would be hidden and safe from future harm. When Super Sonic and Enerjak fought, Shrine Isle was created. A bridge was later added to it.

Dr. Finitevus eventually came into contact with the Dark Egg Legion in Downunda and made an alliance with them by handing over his Warp Ring technology, allowing them to anchor Angel Island to Downunda and be under the Eggman Empire's control. In return, Finitevus would be allowed back on to the island at any time to study the Master Emerald. His plans were thwarted, however, by the combined efforts of the Chaotix and the Downunda Freedom Fighters. 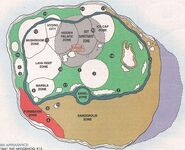 147.jpg
The map of Angel Island taken from The Complete Sonic Comic Encyclopedia
Add a photo to this gallery

Retrieved from "https://sonic.fandom.com/wiki/Angel_Island_(Archie)?oldid=1300963"
Community content is available under CC-BY-SA unless otherwise noted.