An Ancient Ruin, from Sonic Adventure 2.

The Ancient Ruin[1] (ナックルズ族の台座, Nakkuruzu-zoku no daiza?, lit. "Knuckles Tribe pedestal") is an object that appears in the Sonic the Hedgehog series. It is an ancient monument that can be used to unlock alternate paths in different stages with the Mystic Melody.

The Ancient Ruins are small shrine-like temples which use the same map textures from Lost World. They apparently originate from the Knuckles Clan civilization.

In Sonic Adventure, and its enhanced port Sonic Adventure 2: Battle, the Ancient Ruins can be found in every stage. At first, the playable characters can only examine the Anicent Ruins (only Knuckles seems familiar with them). However, upon obtaining the Mystic Melody, they can use it to activate these ruins which will create a path leading to either shortcuts through the stage, other objects, or lost Chao.

How these paths open depends on the stage, such as:

In the Sonic the Hedgehog comic series and its spin-off comic series published by Archie Comics, there is a pedestal inside the Eusebes Temple that looks virtually identical to the Ancient Ruins. Coincidentally, the Mystic Melody was played near it to initiate the rebirth of Aquarius, further enforcing their similarities. 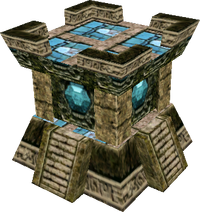