"An Enemy in Need"

"An Enemy in Need" is the fifty-sixth episode of the anime series, Sonic X. It first aired on 14 March 2005 and 1 October 2005 in France and the United States respectively.

After saving the planet in the previous episode, Sonic and his friends are thanked in a feast. Dr. Eggman is watching the scene and he thinks about his next scheme to take away the Chaos Emerald. Bokkun suggests a plan to Eggman, but the evil doctor does not notice that it has been elaborated by Rouge, who made her way to the Crimson Egg and blackmailed Bokkun with his heart-shaped locket and threatened to show everyone the picture inside it.

Eggman soon finds Knuckles and he tries to persuade him that he did not want to be a bad person anymore, and he wishes to leave the planet by using a Chaos Emerald. Knuckles believes him and he finds the others in order to take the Emerald they just found and to give it to Eggman. Sonic and the rest of the gang disagrees, pointing out that Eggman had lied to Knuckles before and now he is lying to Knuckles all over again and Sonic and Knuckles engage in a fight, much to Cosmo's dismay. Taking advantage of the situation, Eggman almost takes the Emerald, but he is stopped by Amy and the others. Then, a giant robot controlled by Bocoe and Decoe appears suddenly and it captures Cosmo. Eggman summons Sonic to give him the Emerald and he would let Cosmo go away. This creates a chance for Rouge to steal the Chaos Emerald, but at the same moment, a frog-shaped Metarex rises from the ground and it grabs the Emerald. Eggman let Cosmo go and he engages a fight against the Metarex. However, Eggman is defeated. It's Sonic's turn to fight the Metarex and, with the help of the Sonic Power Cannon and Chris' trick, the blue hedgehog is victorious. The episode ends as Knuckles apologizes for being fooled by Eggman. 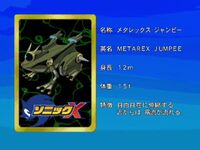 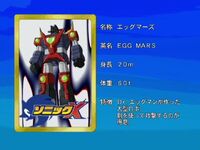 Egg Mars
Add a photo to this gallery