Both regular and worn down Amenbos, from Sonic the Hedgehog CD.

The Amenbo[1][note 1] is an enemy that appears in the Sonic the Hedgehog series. It is a mass-produced, water strider-based Badnik created by Dr. Robotnik.

The Amenbo is one of the smallest Badnik models that Dr. Robotnik has ever created, being based on water striders. It has a cyan-colored body with metallic and spindly gray legs. Also, located on the rear of Amenbo is a sizable rotor used to navigate the surface of the water.

IN Sonic the Hedgehog CD, the Amenbos appear as enemies in Tidal Tempest. In gameplay, they move left and right on the surface of water pools and stopping for a moment at the edges of them. When the playable character comes within range however, it will fire a small flashing projectile at them, although they do so rather sporadically. The worn down version of the Amenbos in the Present and Bad Future is not very different from its pristine version, except the fan on their bodies is broken and they wear a tired expression. In addition, they move slower and never fire their projectiles.

Amenbos are rather rare enemies, as they only appear on the surface of large water sections, something which Tidal Tempest has very few of. Otherwise, Amenbos can easily be defeated with a simple Spin Jump or Spin Attack. Also, like every Badnik in the game, the Amenbos are powered by Little Planet flower seeds which will pop out of them when they are defeated.

The Amenbos are able to walk on water surfaces and can shoot deadly energy projectiles. 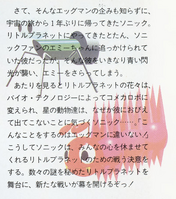 Artwork of Amenbo and Kemusi, from August 1993 issue of Beep! MegaDrive.