Dr. Robotnik in his mobile.

Dr. Robotnik equips himself to a machine.

The Amazing Arena boss consists of a large, lime-green torso-like construct with two appendages that have wrecking balls on their ends. The main body houses Robotnik, who pilots it. There is a hole at the bottom of the vehicle which produces Badniks.

The boss machine produces many fake Badniks on the screen behind it. These Badniks will become real and try to attack the player. The boss will also attempt to harm the player with wrecking balls at the ends of its "arms". The battle ends when it has been attacked a sufficient number of times. 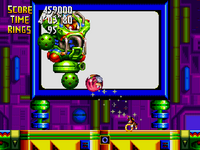 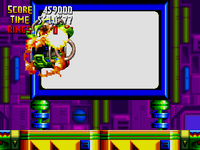