Akira Yuki (結城 晶, Yūki Akira?) is a recurring character from the Virtua Fighter series. He has made several appearances in the Sonic the Hedgehog series.

In Sega Superstars, Akira Yuki appears in the Virtua Fighter minigame alongside Jacky Bryant, Sarah Bryant and other fighters.

Akira Yuki also appears as a playable character in Sonic & Sega All-Stars Racing, where Jacky Bryant drives a red OutRun-esque sports car called "Red Lightning,". He sits in the passenger seat, arms folded. Akira's All-Star is Virtua Fight, where he jumps out of the car and punches it, sending it flying forward with incredible speed and knocking out anything in its path. In the DS version Akira is absent. In Jacky's All-Star, Jacky attacks by spinning the car when the item button is pressed.

In Super Smash Bros. for Nintendo 3DS and Wii U, a costume based on Akira appeared as a downloadable outfit for the Mii Fighter.

In Super Smash Bros. Ultimate, a costume based on Akira appeared as a downloadable outfit for the Mii Fighter on 6 November 2019. He also appears as an Assist Trophy, which is based on his model from the first Virtua Fighter game.

In SEGA Heroes, Akira appears as a playable hero, added into the game as the final character of the set representing the Virtua Fighter franchise in version 2.6.1. He became first unlockable in the "Alright, Let's Go!" event.

In Sonic Colors: Ultimate, Akira makes a cameo appearance as one of the many optional profile icons available in the Customize menu. 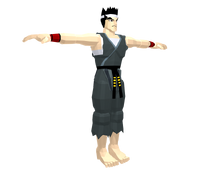 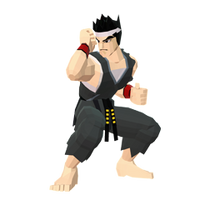 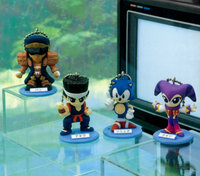 Keychain figurine in a set with Sonic and NiGHTS