Shadow with his Air Shoes on, from Sonic & All-Stars Racing Transformed.

A pair of hover shoes.

The Air Shoes,[1][2][3] also sometimes referred to as the Hover Shoes[4][3] or Jet Shoes,[3] are objects that appear in the Sonic the Hedgehog series. They are the shoes worn by Shadow the Hedgehog. Their origins are unknown, although Shadow has worn them since his awakening on the Space Colony ARK.[5]

The Air Shoes are mainly white and smooth with black heel regions. Above the topline, each shoe has a red tongue and black collar encircled by a single Inhibitor Ring. Around the rim of the soles, the Air Shoes have red strips of metal on the rear and front of the bottom, broken below the in-steps. Over time, these strips have been depicted with spots where the red paint has been scratched off, pertaining perhaps to either Shadow's longevity or battle scars. On the bottom of each sole is an orange-yellow line of five small "jets" (three up front and two on the heel).

The Air Shoes (as their name suggests) can expel air from their jets to create a cushion of air, which lets Shadow hover just above the surface of the ground. This allows him to glide just above the surface[4] on seemingly any terrain, much like a hovercraft. For Shadow, the Air Shoes are the primary source of his speed.[4] With them, he can achieve speeds matching,[3] and supposedly even surpassing Sonic the Hedgehog's running speed.[2]

The Air Shoes' jets are controlled by Shadow at will. By increasing their intensity, Shadow can produce fire from his Air Shoes' jets to attack opponents[6] or provide extra power to jump.[7] The Air Shoes can also produce strong enough propulsion to let Shadow hover in midair (though they have no flight capabilities) and boost forward at speeds matching the Boost at a hovering height just above the ground.[8]

In the Sonic X anime series, the Air Shoes appear during the Shadow and Metarex Sagas, where they are worn by Shadow the Hedgehog.

In the Sonic Boom franchise, a version of the Air Shoes appear, where they belong to Shadow the Hedgehog. In this media, the shoes keep much of the same appearance, with the only change being that they have larger cuffs and the red goes onto the shoes as well. Unlike other incarnations, these shoes allow Shadow to fly, letting him reach mid-air speeds rivaling that of the Eggmobile.

In the Sonic the Hedgehog comic series and its spin-offs published by Archie Comics, the Air Shoes are called rocket-skates. They are worn by Shadow the Hedgehog and allow him to travel at near-Sonic speeds.

In the Sonic the Hedgehog comic series and its spin-offs published by IDW Publishing, the Air Shoes are called rocket skates. They are worn by Shadow the Hedgehog and allow him to travel at near-Sonic speeds. 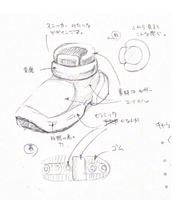