Shadow in Air Fleet, from Shadow the Hedgehog.

The president's escort to a safety zone.

Shadow! We're in big trouble! The Black Creatures are after the President's escape pod! You've got to stop them and save the President!

Air Fleet is one of the fifth Stages in Shadow the Hedgehog. It is reached by completing the Hero mission of Central City, the Normal mission of The Doom, or the Dark mission of Sky Troops.

Central City lies in ruins, despite the best efforts of Knuckles and GUN to reduce the damage by defusing the Black Arms' explosives. The Eggman Fleet has been decimated during a confrontation with the Black Arms' fleet, and Black Doom has shown Shadow his past destroying one of GUN's most powerful machines. The future looks bleak for Earth. High in the skies of Earth, GUN's flying battleships are evacuating from Central City. At Central City, in the White House, the Commander arrives with two of his men and urges the President to evacuate to a more fortified position to protect themselves from the advancing Black Arms, which the President reluctantly agrees to after some encouraging words from the Commander. Shadow and Black Doom stand outside the building as they watch the President escape towards GUN's flying battleship holding position overhead. Black Doom orders Shadow to follow the President. Shadow then skates off towards the battleship that the President's escape pod is going to as it begins to depart.

Immediately upon boarding the battleship, Shadow runs into Tails, who asks for Shadow's help in protecting the President's shuttle from the Black Arms' boarding parties by defeating all the aliens. If Shadow chooses to side with Black Doom instead, he must destroy the shuttle, which is being conveyed on a monorail track through the ship, before it reaches the safety of a secure hangar in the ship and is unable to be pursued further. Alternatively, Shadow can simply pursue the Chaos Emerald located in the ship.

The following weapons can be found in Air Fleet:

Behind the Secret Door is an Air Saucer. When mounted, it enables Shadow to grind along the Electrified Rails safely. The rails lead to a secret room filled with weapons, 1-Ups and a Damage Recover. The Air Saucer can be used all the way through to the end of the Stage, but this will require some careful riding.

Flip the junction switches to the red position to lead the ship into unprotected areas. It is best to attack when the escape pod is rotating along the rail. Use the Stage's cannons and turrets when they are available. To get an A-Rank, the escape pod must be destroyed before it reaches to the end. Otherwise, the player can attempt to speedrun the stage and destroy it while it is on the final elevator.

Use Chaos Control in areas where more jumping than running is required. Throughout the facility are fans that will try to blow Shadow backward. To keep from being blown away, grab on to the bars and hang on until the wind stops. After the wind stops, Spin Dash forward and jump over the laser turrets to exit the area. Shadow cannot grind along the electrified rails, so use an Air Saucer to cross the areas. These electrically charged rails save a little time, but more importantly, they often lead to a weapon container. The first trouble spot occurs after the third Save Point. Outside of the facility are moving platforms. Jump across to the third one, then Spin Dash along the wall between the lasers and grab onto the pole and climb up.

The player should always take the green path.

By each Save Point, the player should have defeated the following amounts of Black Warriors and Black Oaks:

Air Fleet's Expert Mode calls for good use of Chaos Control. If the player can power their Hero Gauge up so that it is full just before the outside sections, they can use their Chaos Control to navigate through the rest of the stage. 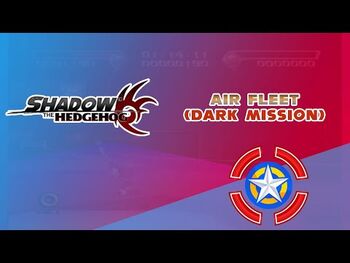 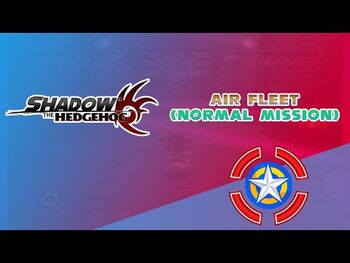 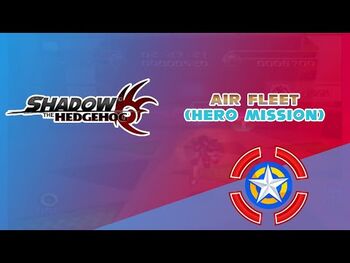 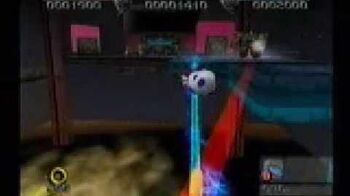