An Aero-Cannon, from the Xbox 360/PlayStation 3 version of Sonic Unleashed.

These miniature hovering gun turrets open fire on anything that moves into range. The recoil from each shot sends them reeling just long enough to be vulnerable.

The Aero-Cannon is an enemy that appears in the Sonic the Hedgehog series. It is a mass-produced, cannon-based Badnik model created by Dr. Eggman which works as a hovering gun turret.

The Aero-Cannons are relatively small robots. They have an orb-shaped torso with two small semicircles on the bottom of it that function as feet, and a hemisphere attached on each side of their torso. Their head is a thick bar running along the top surface of their torso, and they have two eyes and a small straight field of yellow light running across their face, resembling teeth. Sticking out from the chest and slightly from their back, they have a long, single-barreled cannon. They are steel blue, yellow and silver in color, and have pale yellow eyes.

The Aero-Cannons appeared for the first time in both the Xbox 360/PlayStation 3 version and Wii/PlayStation 2 version of Sonic Unleashed. They can only be encountered in the daytime Action Stages/Stages of the game. In gameplay, they attack the player by shooting fast and precise energy blasts at them. When using a Homing Attack on the Aero-Cannons, caution is advised since there is a good chance they can hit Sonic with their shots before he can hit them.

In the console/PC version of Sonic Generationsm the Aero-Cannons appear as enemies. In this game, they can only be encountered in Rooftop Run. In gameplay, their attack patterns are the same as they were in Sonic Unleashed.

The Aero-Cannons are very hostile machines who will open fire on anything that moves into range.[1]

The Aero-Cannons can levitate in mid-air on their own. Thanks to their built-in cannon, the Aero-Cannons can fire highly powerful energy blasts at their opponents. However, the recoil from their shots is so strong that they are sent reeling back when after firing, leaving them vulnerable. 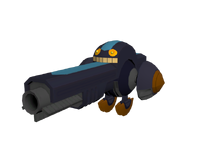