Sonic News Network
Register
Don't have an account?
Sign In
Advertisement
in: Articles in need of expanding, Eggman's creations, Robots,
and 2 more
English

Admiral Jelly, from the Wii version of Sonic Colors.

Admiral Jelly[1] (コマンドー・ゼリー[2][3], Komandō Zerī?, lit. "Commando Jelly") is a character that appears in the Sonic the Hedgehog series. It is a humanoid-based robot naval captain created by Dr. Eggman. During the Wisp incident, it would guard one of Eggman's tractor beam generators, only to be destroyed by Sonic the Hedgehog.

Admiral Jelly's body consists of a typical white naval uniform top, two pincers that act as his "hands" while doning a scarlet, purple and yellow mechanical fish tail. His facial features are the same as Captain Jelly's, having an orange head, cyan eyes and wears a white naval cap with a yellow Eggman Empire decal on its front.

Admiral Jelly also carries a submarine's periscope with the same colors as Admiral Jelly's tail which bears a single eye at its mirror.

In the Wii version of Sonic Colors, and its remaster Sonic Colors: Ultimate, Admiral Jelly would guard the tractor beam generator on Aquarium Park with its massive galleon and crew consisting of robotic minions. When Sonic the Hedgehog eventually arrived at the generator, Admiral Jelly would engage the hedgehog. However, it was destroyed by Sonic, resulting in the shutdown of its tractor beam generator.

In the Wii version of the game, the Admiral Jelly battle is similar to the Captain Jelly battle, though it is more difficult. As the entire battle occurs underwater, the player must keep using Air Bubbles to avoid losing a life due to drowning. The player must reach the end of the submarine to a giant glass dome encasing a lever switch inside while guiding the homing torpedoes homing on Sonic to break open the dome. There are large upwards-moving torpedoes that let the player stand on them without dealing any damage to the player but these torpedoes will destroy the small homing torpedoes upon contact. If the homing torpedoes hit any of the smaller round glass domes, they will break open and release Rings, though if a specific white torpedo breaks into a glass dome, a Yellow Wisp will be granted to the player. When the switch is activated, the player then faces Admiral Jelly alongside a crew of sailors from his sub. The crewmates cannot deal any damage to Sonic but they can be attacked to gain points and spawn a White Wisp which fuels the player's Boost Gauge. Admiral Jelly attacks by spinning to the side while moving around the stage for a short while; the player can use that time to destroy the pirates, and hit the Admiral when he is standing still, looking around with his periscope and speaking some robot gibberish while he is vulnerable. Admiral Jelly requires a maximum of three hits to proceed into the next phase where the player will return to the submarine and must repeat the above process once more to destroy Admiral Jelly. In the second phase, the large torpedoes move in a different formation to make it harder for the player to get the small homing torpedoes to hit the glass dome encasing the switch.

Using the Yellow Drill can be used to deal triple damage against Admiral Jelly. However, once the player transforms into the Yellow Drill, Admiral Jelly will bolt off in a random direction at full speed to escape, making it harder to hit him this way compared to when fighting Captain Jelly back on Sweet Mountain; a red arrow will point towards his direction, making it easier to find him. While the player is chasing Admiral Jelly, he may change directions suddenly, so it is recommended that the player learns to use the drill boost at the correct times in order not to waste it.

Obtaining an S-Rank in this battle may depend on prolonging the Yellow Drill long enough before hitting Admiral Jelly to gain enough points, as well as hitting as many of Admiral Jelly's crewmates as possible during that time. In Sonic Colors: Ultimate, earning an S-Rank will unlock the achievement, "Fast As A Shark". 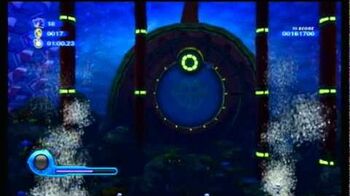 Admiral Jelly is the boss of Aquarium Park and the fourth, fifth or sixth boss of the Nintendo DS version of Sonic Colors (depending on the player's choices). It is fought with Sonic in Aquarium Park Boss Act after clearing Aquarium Park Act 2.

The Admiral Jelly battle takes place at a fixed location consisting of a platform with balloons on the side to help bounce the player back onto the platform should they fall off. Since the battle occurs underwater, the player must still use Air Bubbles to avoid losing a life due to drowning which can be generated by jumping on a capsule at the middle of the platform. The player can Stomp on the ends of the platform (indicated by the pavement area) to tilt it towards that direction, allowing them to pick up the Rings that are aligned at that angle more easily. Admiral Jelly will attack as follows:

The player must hit Admiral Jelly until his health is nearly depleted, then hit his head once more to destroy him and end the fight. 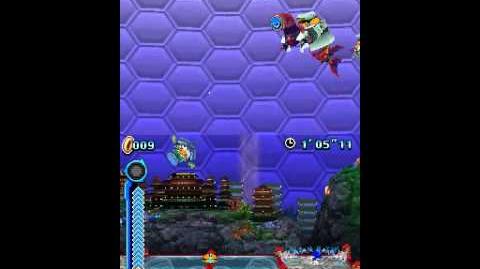 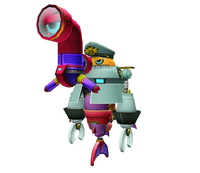