An ancient research facility of the Ancients

The Abandoned Research Facility (古代族の研究施設, Kodai-zoku no kenkyū shisetsu?, lit. "Research Facility of the Ancient Tribe") is the second area of Sonic Boom: Rise of Lyric.[1] It is the hidden ruin of a research facility belonging to the Ancients which has been deserted for a long time.

Long after its abandonment, Team Sonic came to the Abandoned Research Facility to find the Sun Crystal. In addition to the Crystal, the team also found MAIA, who would lead them to a map for the other Crystals' locations, and Shadow.

The Abandoned Research Facility is located within a tropical region. The landscape surrounding the facility is a distant, mountainous archipelago, where large palm trees and lush grass grow in abundance on top of rocky cliffs. Ancient rocky structures resembling watchtowers can also be seen on each island.

The Abandoned Research Facility resembles an industrial factory crossed with a temple ruin. It is made from pale rocks with metallic runes and markings covering the walls, and holds scaffolds with artistic frameworks. Over time, weed, moss, vines and colossal roots have grown through the walls and into the factory. While the place appears inactive, it contains several advanced machines and power sources that are still operational, like siding doors, control panels, force fields, batteries, elevators, conduits and fuse boards. The interior of the facility is lit up by faint blue lights on the walls.

The Abandoned Research Facility is split into the upper and lower levels. The upper levels, despite the flora, some collapsed scaffolds and cracks in the walls, remain in surprisingly good condition, and consist of large and bright rooms. The lower levels are more dark and resembles sewers flooded with water. These levels consist of tunnels and large metallic maintenance rooms connecting said tunnels. Down there, there is also a colossal flooded room for housing a massive thing and an abandoned laboratory with a time machine.

A thousand years ago, the Ancients hid the Sun Crystal in the Abandoned Research Facility so that Lyric could not find it.

In the present day, Team Sonic came to the Abandoned Research Facility to find the Sun Crystal, but got split up when Sonic and Tails got trapped in the lower levels via a trap door. As Knuckles and Amy continued onward to meet up with their friends, they met an old robot named MAIA who had to find Sonic as only he could stop Lyric. Due to a slip of the tongue, Knuckles told where he was.

Sonic and Tails soon met MAIA, who explained she helped imprison her creator Lyric a thousand years ago and that there once was a map leading to the Crystals Sonic seeks. She thus unveiled a time machine which could take them back in time to when the map still existed. With Knuckles and Amy's aid, they restored power to the facility for the time machine, while Knuckles and Amy got the Sun Crystal.

Before MAIA had a time portal ready, Sonic and Tails met Shadow who intended to prove Sonic's weakness with a fight. Their battle took them through time portals to different eras, until Sonic kicked Shadow into a portal leading to the near future. Sonic and Tails then resumed their trip to the intended time.

Lyric soon after came to the Abandoned Research Facility, only to find the Sun Crystal gone. There, Lyric met Dr. Eggman who tried to make him surrender the secrets to his technology using the Destruction Troops. However, Lyric retook control of his robots, so Eggman made an uneasy partnership with him instead. Learning they had a common enemy in Sonic, Eggman agreed to help Lyric recover the Crystal map which Sonic now had. When Eggman returned to report that he had lost the map, but also claimed that he had killed Team Sonic, Lyric had anticipated his failure and sent his Driller Worms to find the Crystals.

In the Abandoned Research Facility, the player passes through several rooms inside the complex. Like other areas in the game, the Abandoned Research Facility includes a speed level section, where the player runs down a long path with speed-enhancing gimmicks while avoiding hazardous obstacles, and as well slower-paced areas for exploration and combat. It also features the standard puzzles that the player must solve with the Enerbeam mechanic and Buttons. This level also introduces tiles puzzles where the player must find and step on a white tile and then press a series of blue tiles in the right sequence to proceed.

Despite all four characters being available, the Abandoned Research Facility contains only gimmicks for Sonic, Knuckles and Amy's character actions. This include Spin Balls for Sonic, Climbable Walls and Ceilings for Knuckles, and Beam Swing and Balance Beams for Amy. There are also Hydro Gates which allows the player to run across water sections with the Hydro Dash, where the player has to dodge obstacles and jump off ramps. Environment hazards in this area include only bottomless pit andmines in the Hydro Dash sections. Additionally, there lie Commando Husks all around which the Parasite Snakes can possess, thus creating stronger and tougher enemies.

In the Abandoned Research Facility, the main objective is to collect the Sun Crystal. The level begins with a speed level section, where the player controls all four playable characters. After that, the player moves into the facility where they must solve a tile puzzle. Then, the player must climb to the top of the unlocked room using Knuckles or Amy and shut off the room's power with the Enerbeam. This will separate Sonic and Tails from Knuckles and Amy.

The player now takes control of only Knuckles and Amy, and must go through a door that opens nearby. From there, the player must continue to an arena where they have to defeat enemies while waiting for a door to open. The player then has to continue through the door to an elevator where they must defeat incoming waves of enemies and repeatedly use a Button to make the elevator ascend. Once at the top, the player must deactivate a force field by clearing a puzzle in a room next door. The player then has to enter the room the force field blocked and put together a Tube puzzle. Go through the Tube to enter an arena with enemies until the path opens and follow it to MAIA.

During this battle, Shadow will attack with an energy charge, Chaos Spears and the Chaos Blast. To defeat Shadow, watch his movements and strike when he is vulnerable. Go three rounds with him to complete this boss. 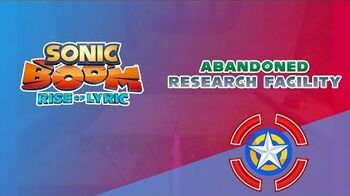