"A Wild Win" is the forty-sixth episode of the anime series, Sonic X, as well as the fifth and final episode of the Emerl Saga. It first aired on 15 February 2004 and 26 February 2005 in Japan and the United States, respectively.

Continuing the struggle for the Chaos Emerald, the battle left off with Knuckles fighting Chris, but Knuckles refuses to fight him. Chris tells Knuckles to give up, but Knuckles tells Chris to look and see who he has to go against next if he beats him. Upon discovering that he has to fight Amy or Rouge, Chris forfeits the match. Amy and Rouge battle, with Rouge coming out as the victor. Mr. Tanaka was up against Emerl, but forfeits. Mr. Stewart was supposed to fight Lucky, but runs away due to Scarlet Garcia recognizing him. In the semi-finals, Emerl was able to beat Lucky without even touching him (most likely since Emerl can copy Lucky's luck). Knuckles faced off against Rouge, leaving Knuckles as the winner.

In the final round, Knuckles and Emerl fight. In the first few minutes, Knuckles overpowers Emerl, but Emerl counterattacks him using Sonic's Spin Attack, giving him a beating. Cream eventually decides to throw in a towel so Emerl would have to give up, but Knuckles forfeits the round before she does so. Meanwhile, Sonic is up against Eggman, and is able to knock him out.

Having won the tournament, Emerl earns the Chaos Emerald. However, the Chaos Emerald's power causes him to go on a rampage, and begins to attack everyone in the stadium and destroy the city. While no one knows why Emerl is being destructive, Chuck Thorndyke believes that an "uncertain reaction" between Emerl and the Chaos Emerald caused him to act this way. Eggman finds out that Emerl was originally an ancient fighting machine.

Sonic, Knuckles, Tails, Amy, and Rouge try to stop him, but since Emerl is capable of copying abilities, none of them are able to succeed in doing so. Eventually, Emerl lures the gang to a cliffside and knocks Sonic and Knuckles into the sea, but they are thankfully saved by Cream. Cream then tries to communicate with Emerl, but this does not have an effect.

Emerl tries to attack Cream, but Sonic defends her, causing him to get brutally punched in the crotch. This makes Cream shocked, so she and Cheese attack Emerl. During the fight, Emerl does not retaliate at all, which confuses Knuckles and Rouge at first, but Chuck then realizes that Emerl cannot copy multiple skills at once, giving Cream and Cheese enough time to strike him.

Cream and Cheese finally give Emerl one last kick, knocking him over the edge and into the water. Before he is destroyed, though, he regains his memory of when he first met Cream, Cheese and the others. Emerl begins to shed tears, proving that he was not just a weapon of mass destruction; he also had a heart. He then explodes, leaving Cream and Cheese crying over his destruction. 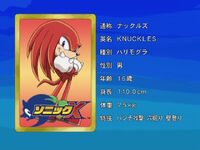 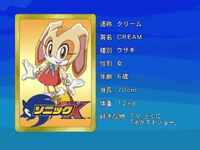