View source
watch 01:54
Arcane: League of Legends - The Loop
Do you like this video?
Play Sound
Main page GalleryTranscript

"A Fearless Friend" is the seventy-seventh episode of the anime series, Sonic X. It first aired on 17 April 2005 and 29 April 2006 in France and the United States respectively.

As the giant Metarex seed, Final Mova, finally reaches the final stage of its metamorphosis, its energy levels start to rise rapidly, while everyone watches in confusion. Trying to stop Final Mova Shadow charges towards the giant Metarex seed to destroy it. Sonic also has Chris deploy the Ring Tunnel which Sonic uses to launch a Spin Attack at Final Mova. Final Mova, however, resists Sonic's attack and releases black energies from its holes and knocks Sonic and his crew back. Shadow tries to counterattack with his Chaos Spears, but it is a futile effort. In the end, the entire group crash back on the Blue Typhoon.

Back inside the Blue Typhoon, the Chaotix has recovered the drained Chaos Emeralds and the crew are now trying to think what to do without extra power. Out of nowhere, Dr. Eggman reveals that they may be able to restore the Chaos Emeralds' power if they transfer their ships' remaining energies into them. Suddenly, however, Final Mova begins to emit energy waves which drain the energies from animals and robots across the galaxy, while causing plants on the various planets to grow at abnormal rates. If this were to continue, all animal life in the galaxy would perish. The only one unaffected by the waves is Cosmo, due to the fact that she and the Metarex come from the same race. As such, she sets off with the Chaos Emeralds in hand to bring them to Eggman so he can restore their power. Along the way, Cosmo communicates with Dark Oak telepathically, telling him that she and her friends will never give up fighting for peace. In retaliation, Dark Oak has the vines on the ship attack and try’s to kill Cosmo. Stuck in the vines, She loses the Chaos Emeralds and they drop into space. As Sonic and Shadow try to react, the Planet Eggs inside Final Mova respond to the Chaos Emeralds, causing them to emit energies that not only cease Final Mova's life-draining energy waves, but also restore the Chaos Emeralds.

As the Chaos Emeralds float down towards the Blue Typhoon, both Sonic and Shadow, who has put their differences aside, use them to transform into Super Sonic and Super Shadow. They then fly forward Final Mova, tearing its seed-form apart at different spots at incredible speed. This results in Final Mova breaking apart and emitting a large blinding light. Final Mova, however, was not destroyed. Instead, it has shred its crust and transformed into a black planet. Realizing that the Metarex's plot to rule the galaxy has been foiled, Dark Oak begins his plan to destroy the universe as revenge by compressing Final Mova's energy, creating a powerful gravitational field that expands into space. As everyone watches the event unfold, Chris eplains Dark Oak's plan: like how a balloon will pop if squeezed too hard, Dark Oak plans to crush his Final Mova form until it explodes, causing a explosion powerful enough to wipe out the universe. Super Sonic and Super Shadow launch themselves at Final Mova, but are unable to break through its gravitational field. Meanwhile, onboard the Crimson Egg, Eggman acknowledges that he has built a self-destruction system in Decoe and Bocoe and plans to use it to break into the field. However, he admitted later that it was useless anyway.

Meanwhile, Shadow tries to remove his Limiters to gain enough power to break through the gravitational field, but Sonic convinces him that it is not the right time for that. Instead, Sonic orders the team inside the Blue Typhoon to use the Sonic Power Cannon to launch him at Final Mova. Tails and the others hesitate following the plan, as it puts both Sonic and the cannon at risk if they use the cannon while Sonic is in his Super form. Sonic, however, insists that it is their only way to win. Forced to do so, the crew prepare the cannon for Sonic, channeling all the remaining energy on the ship to the cannon.

Watching from the Blue Typhoon, Cosmo feels helpless, but her mother Earthia, in her mind, assures her that she is the one destined to save the galaxy. It is then that Cosmo's red amulet breaks and she transforms into a new form, now filled with determination to stop the Metarex's threat once and for all. With her new powers, Cosmo flies to Final Mova, passing through and dissipating the gravitational force field, and plants herself on top of it, becoming a tree. Contacting her friends telepathically, Cosmo says that she has now immobilized Dark Oak. She then tells Tails to load the Sonic Power Cannon and fire it at Final Mova.

Initially, everyone is shocked and cannot come to a final decision about whether or not to risk saving the universe if they are going to kill Cosmo in the process, especially Tails, who orders them all to leave to prepare for the situation. Having made up his mind, Sonic flies into the Sonic Power Cannon to prepare the shot. No sooner, Super Shadow enters the cannon to help Sonic. Sonic welcomes the help with a brief smile, which Shadow returned, and they start charging the Sonic Power Cannon with their Spin Attacks, much to everyone's shock.

Tails, however, is very hesitant to sacrifice Cosmo, but Dr. Eggman reassures Tails about the destiny that the plant species have placed in Cosmo: to save the universe from the Metarex and bring her clan back as the seeds from her tree will spread through the galaxy. He then thinks back to all the strong memories he have had during their intergalactic adventure. Finally, Tails comes to terms with his feelings and after saying a calm "goodbye", he presses the Sonic Power Cannon's ignition button and fires Super Sonic and Super Shadow at Final Mova, completely destroying it, including Cosmo, much to everyone's sadness. In the original dub, after the planet explodes Cosmo and Tails see each other again before parting ways saying they had fun together and they'll never forget each other which ends when Cosmo disappears into the light saying she loves Tails no matter what. 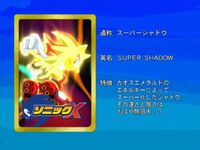 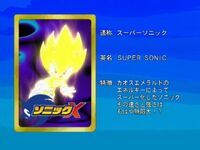