watch 03:03
The Loop (Games)
Do you like this video?
Main page GalleryTranscript

"A Date to Forget"

"A Date to Forget" is the forty-second episode of the anime series, Sonic X, as well as the first episode in the Emerl Saga. It first aired on 18 January 2004 and 29 January 2005 in Japan and the United States respectively.

Amy becomes angry and upset when Sonic forgets to show up for their date, and she goes out with Sam Speed instead, who also had plans with Sonic. Bokkun, left to free Eggman from jail, activates an old robot named Emerl under the instructions of Dr. Eggman to aid him spring Eggman from jail. Sonic is forced to take on Bokkun, while Amy and Sam battle one of Eggman's robots. Amy learns why Sonic likes to run so much, and they soon arrive at the beach. Sonic, who defeated Bokkun, shows up and races Sam again. In the end, Cream and Cheese find Emerl in the garden. 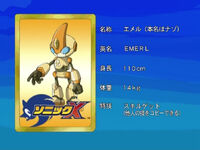 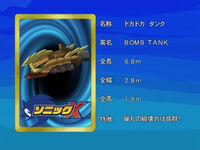 Bomb Tank
Add a photo to this gallery