"A Dastardly Deed" is the twenty-fifth episode of the anime series Sonic X. It first aired on 21 September 2003 and 20 March 2004 in Japan and the United States respectively.

Sonic and friends search everywhere for the last Chaos Emerald. Chris is a little bit depressed despite that he wants his friends to be able to go home to their world, but at the same time, he will miss them deeply. During school, Mr. Stewart notices this and convinces Chris that letting them return to their home is the best option. Meanwhile, Dr. Eggman has deployed E-77 Lucky, a robot designed to bring good luck, to go out and find the seventh Chaos Emerald as well, hoping to rely on luck in order to find the Emerald. However, Lucky is very clumsy and falls off after taking its first step out of the Egg Fort II which leaves Decoe and Bocoe heavily skeptical about the plan.

Knuckles walks through Forest Hill, talking to himself, worried about the Master Emerald and is desperate to return home by all means. He concludes that it is up to him to reconcile the differences between Sonic and Eggman in order to get all the emeralds together and return home. Knuckles finds the Egg Fort II hiding in Forest Hill and he also finds Lucky who follows him to Chris' house in order to talk to Sonic. However, Knuckles found Chris instead at home and then tells him to pass on his message to Sonic. Afterwards, he and Knuckles headed to meet Eggman although it took them a while to realise that Lucky is no longer following them. While there, Knuckles make a temporary alliance with Eggman to combine their collections of emeralds with the doctor in possession of them.

Chris takes the four Chaos Emeralds that Sonic and his friends collected without telling them and he and Knuckles take them to Eggman. Meanwhile Lucky has fallen in a dumpster and ends up wandering the South West Dump where he finds a box containing the seventh Chaos Emerald. Lucky contacts Eggman on the phone and informs him of the good news. When Eggman hears that Lucky has the seventh emerald he betrays Knuckles by activating a trap door underneath him. Eggman then reveals to Chris that he does not care about staying there or going home, he just wants to establish his Eggman Empire. Either world would not make a difference to where he would establish.

Sonic arrives in Forest Hill in time to find Knuckles on the ground and the Egg Fort II taking off. Knuckles tells Sonic that Chris is kidnapped on board as well as the remaining six Chaos Emeralds, so Sonic chases after the ship. 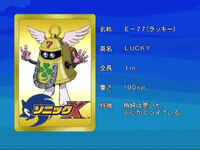 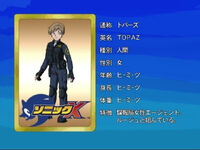